And that's it for our coverage of Tuesday's matches in the EHF Champions League. We'll be back here tomorrow for two more games.

THW Kiel coach Filip Jicha - "It was a great evening with a happy end and a huge step forward to get into the flow after this long quarantine break. We won two points against a strong Aalborg team, now we sleep over and start our next challenge."

HBC Nantes coach Alberto Entrerrios - "The key was our reaction during the 2nd half. We played with more intensity, especially during the money-time."

Both Group B matches were on a knife edge for so long! In Nantes, the away side would have been dreaming of getting points on the board, but it wasn't to be.

Here's our review of how Nantes just saw off Zagreb. 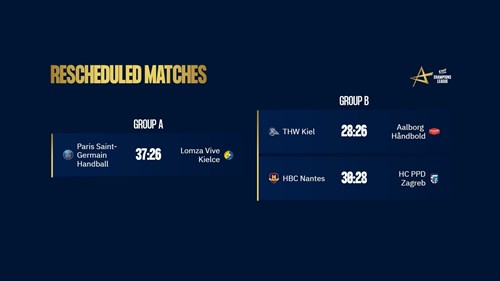 THW Kiel stay in 5th in Group B but are now just a point behind tonight's opponent Aalborg. Here's our review of an action packed game that the away side led for so long.

We always knew Kiril Lazarov was magic... here he is performing his famous disappearing-ball trick... 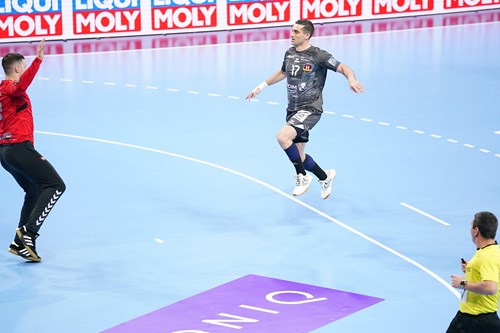 The boys in black and white praising their late turnaround!

Close but not close enough tonight for Aalborg, but this was special! Finished off by Nicolaj Christensen

Sebastian Barthold top scored in the Kiel v Aaloborg match with 7 despite ending up on the losing side.

But a special shout out to Valero Rivera who reached double figures for Nantes tonight! 10/13 against Zagreb.

Drama in Kiel too! After being down for most of the second half, the Zebras turn things around late on against Aalborg to win 28:26

Heartbreak for Zagreb as they see a 28:27 lead disappear and lose 30:28. They remain without points in Group B

Congratulations to Nantes who move on to 10 points

A fantastically close game that could have gone either way

Nantes go 2 goals ahead before another Nielsen save, is that Zagreb's chance gone?

Nielsen makes a save and then his Nantes team go down the court and score, 29:28, 3' to play

Meanwhile in Kiel, Aalborg are maintaining a two-goal cushion, 23:25

Close, edgy, nervy... add in your own words to describe how tight Nantes v Zagreb has been!

Around 15 minutes to go in tonight's late games...

ALL TO PLAY FOR!

For most of the evening, Nantes and Zagreb have been difficult to separate... in more ways than one! 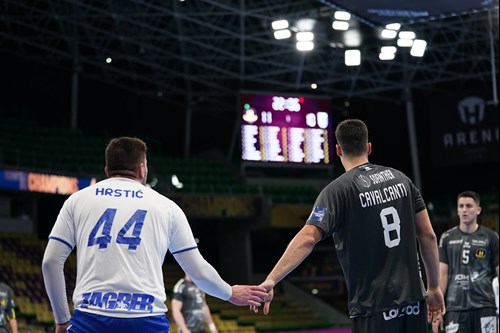 We're about to get underway again for the second half in both games!

As much as we're enjoying your company here, we would understand if you switched over to EHFTV to watch live

We are now at the break in Germany too

Harald Reinkind has 5 strikes for the Zebras, while three Aalborg players are on 3 goals

It's the Croatian side with the lead at the break in Nantes. 13:14 to Zagreb

They've shared the scoring around, but David Mandic leads with 3

Teamwork making the dream work for Zagreb! Will they finally get points on the board tonight?

Closing stages of the first halves of our two live games, Zagreb are ahead 12:13, and Kiel are leading at home 13:12

Too close to call so far between Nantes and Zagreb!

We're already a quarter of the way through our two late games, Aalborg have hit back against Kiel, 7:7, and Nantes have found a bit of daylight between them and Zagreb, 9:7

Our review of today's Group A match is in! If you missed any of the action, read about how group leaders Kielce went down by 11 in the French capital

Kiel have the better of their opening exchanges against Aalborg, 4:2

Nantes and Zagreb are trading blows, 2:2

Five minutes from the off in Kiel and Nantes, live updates here, live coverage on EHFTV and our social media channels @ehfcl 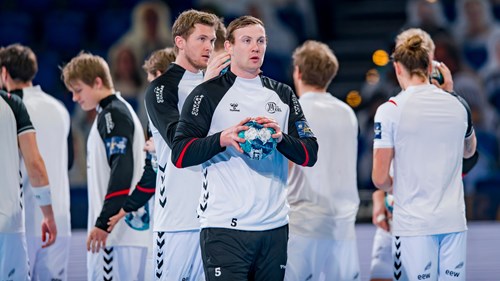 Also in Group B and at 20:45, Nantes in 6th welcome last-placed Zagreb. It's all smiles for now but I'm not sure how much longer that will last!

A win for Nantes could see them go 5th whereas Zagreb are hoping to at last get points on the board.

Both games are live on EHFTV

That's Group A done for another evening, but never fear handball fans, we have Group B action on the way!

THW Kiel will try and close the gap on Aalborg Handball to just a point! A win for Aalborg put them in a great position

But it wasn't just goals that helped PSG build a big lead tonight, Vincent Gerard also proved his worth between the posts

After some squad rotation, Mikkel Hansen joins Luc Steins on 6/6 for the game 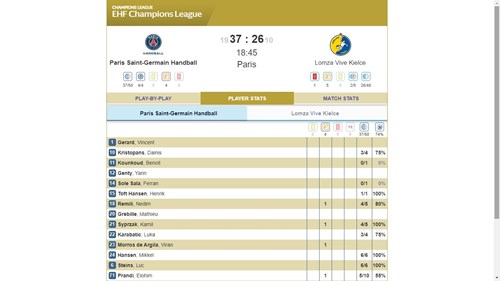 Kielce add some respectability to the score and only lose by 11, but the group leaders were second best throughout tonight.

Congrats to the Parisians!

Seven minutes remaining, Kielce have a 7m shot saved. Nothing has gone their way today, 36:22

Under 15 minutes to go now and we're all a bit stunned, 30:16 to PSG! They have looked different class this evening.

"No way through" means absolutely nothing to Luc Steins.

Kielce are struggling to get a look in! They've just scored their first goal of the second half to cut the gap to 10, 21:11!

The teams are back out on court for the second half

Check out our Live Ticker for more stats! 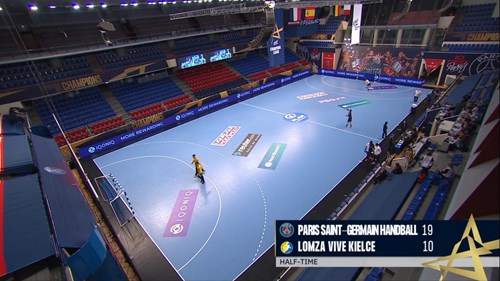 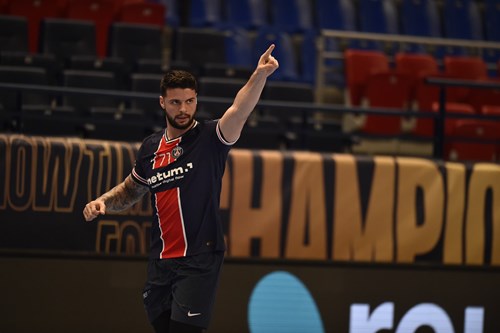 A 7-goal lead for the Parisians with 5 minutes to go in the first half! Who saw this coming? Can the group leaders Kielce bounce back?

Take care of yourselves when watching Luc Steins!

Eight minutes on the clock and the home side have the better of the opening exchanges, 6:3

Make sure you have a read through our round preview! We have matches coming up for you over the next few days, make sure you can impress your friends with your EHF Champions League knowledge

It's never easy to "face au leader de la poule", how will PSG get on this evening? Your 5 minute countdown starts now!

We are 10 minutes away from our first match this evening! Follow the action here, on our social media channels @ehfcl, and live on EHFTV.com

Next Article Go inside Barça with Petrus and Perez de Vargas

Kielce the hunted; Kiel the hunters

ROUND PREVIEW: With 12 matches this week, the EHF Champions League is getting closer to the finishing line

GROUP B REVIEW: Aalborg stand strong for 56 minutes before a late run wins it for Kiel

Nantes turn the match in the last five minutes

GROUP B REVIEW: French side secure second victory on home ground, while unluckly Zagreb are still on zero points

GROUP A REVIEW: Thanks to an incredible first half, Paris took their revenge on Kielce and surely impressed their future opponents.

NEWS: Overview of matches that have been rescheduled and assessed in the EHF Champions League Men 2020/21

Flensburg come out victorious in crazy Match of the Week

MOTW REVIEW: After leading by nine at half-time, Flensburg had to wait until the very last seconds to secure their win against Paris.

Thirteen is no lucky number for Zagreb

GROUP B REVIEW: Home debut of new coach Ivica Obrvan against Veszprém ends with another defeat

Kiel strike back for a lucky draw

GROUP B REVIEW: HBC Nantes were close to their fourth victory in their last five matches