Qualifiers draw sets the path for the EHF EURO 2024

Reigning Olympic champions France will face Poland, Latvia and Italy in their bid to reach the Men’s EHF EURO 2024 after the qualifiers draw in Berlin divided 32 nations into eight four-team groups.

The EHF EURO 2020 runners-up, Croatia were pitted against the Netherlands in group 5 together with Belgium and Greece.

The bronze medallists from the 2020 edition, Norway, meet Serbia, Slovakia and Finland in group 2.

Four Balkan countries form group 7, as Slovenia ended up together with Bosnia and Herzegovina, Montenegro and Kosovo.

The qualifiers will begin on 12 October 2022 and run until 30 April 2023 with the nations battling for 20 places at the final tournament in Germany which will be played between 10-28 January 2024. 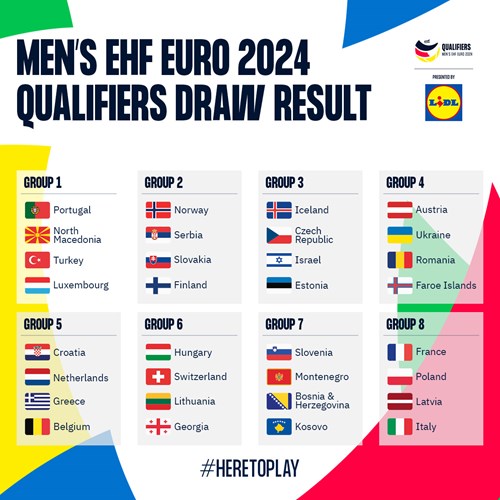 Four national team players assisted at the draw podium at the Hubertusbad in the German capital to determine the fate of all teams vying for a ticket at the final tournament.

Luca Witzke represented the hosting team of Germany at the draw and was accompanied by Maciej Gebala from Poland, Norway’s Kristian Sæverås and Bobby Schagen from the Netherlands

EHF EURO Cup for the hosts and the last medallists

Germany as the hosts, and Sweden (champions), Spain (runners-up) and Denmark (bronze medallists) as the EHF EURO 2022 medallists, are qualified directly for the final tournament. Those four teams will play in the EHF EURO Cup when other nations play their qualifiers.

The first round of the Men’s EHF EURO 2024 qualifiers will be played in October 2022. The basic match schedule is as follows:


Players' reactions on the draw:

"Our group is totally crazy. We were joking about a group like this, before the draw had started, and now it happened to be an All-Balkan group. We know each other very well, this will be a group for all fans, as it is like home matches for everybody."
Vasilije Kaludjerovic
Montenegro national team player

On the draw results:

"I wanted to play in group number 4 with Austria and Ukraine. We are not satisfied, as we got one of the strongest groups with France from pot 1 and Italy is getting stronger and Lativa are also strong. But if you want to play at the European Championship you have to show that you are better than the opponents. We need some luck against France and hope to beat Italy and Latvia. Poland and France will duel for the top of the group, but they are the favourites and we will be the underdog in those matches. We want to cause a bad day for France. We have to work hard and that we are worth to play at the European Championship."

On the qualifiers groups:

"The group with Poland and France is the toughest group. I wish all the teams good luck that they make it to the tournament."

On the EHF EURO CUP:

"This is a very important competition for the development of our young team on our way to the EHF EURO 2024 on home ground. It will be interesting to see, where we are at the moment and there are no better opponents you can face than Sweden, Spain and Denmark. We have big goals for the tournament, and we hope to develop in the right way."

On the opponents in the qualifiers:

"We know most of the teams we face in the qualification, and if we play well, we can beat all of them. Especially it is going to be fun to play against Finland, I never played against our Scandinavian rivals. The group with Poland and France is the toughest, I guess. My teammate Maciej Gebala will be angry that I draw France for him."

"Before the draw I said I want to face Belgium, now we play against them – this will be really fun for both sides. And mainly we hope that many fans will travel to the away matches. I am really happy about that. Croatia are the favourites in this group, because they are a great handball country. Greece are developing very good, so we have an interesting group I hope for many fans in the arena after our strong EHF EURO 2022. We would like to play in Germany, as many of our players are playing for German clubs, we really want to be there, it will be possible, but it is also very hard."

"Our group is totally crazy. We were joking about a group like this, before the draw had started, and now it happened to be an All-Balkan group. We know each other very well, this will be a group for all fans, as it is like home matches for everybody. We are the favourites in this moment, but we have to show this in every game. I am very happy with this group."

Previous Article Race for semi-final berths goes to the wire

FEATURE: After more than two decades in their national team jersey, Yeliz Özel and Sevilay İmamoğlu Öcal were honoured for their extraordina…

NEWS: Time to secure your seats for the November’s championship in Slovenia, North Macedonia and Montenegro

NEWS: The European Handball Federations has published the playing times for the Women’s EHF EURO 2022 with co-hosts Slovenia facing Denmark…

“Our fans will be an additional player”

NEWS: Packages now available to supporters ahead of the final tournament in November

DRAW REVIEW: The draw at the Ljubljana castle set all four preliminary round groups for the 15th edition of the Women's EHF EURO

NEWS: The draw for the Women's EHF EURO 2022 final tournament takes place on Thursday 28 April, with the 16 qualified teams finding out thei…

DRAW PREVIEW: The four groups for the preliminary round of the Women’s EHF EURO 2022 will be drawn in Ljubljana on Thursday