Katarina Pandza is out on double duty this week.

The 19-year-old talent wants to steer Austria’s under-20 team to the Women’s Junior (U20) World Championship 2022 in Slovenia. And she wants to help the senior national team to get a step closer to the Women’s EHF EURO 2022, also in Slovenia, which is co-hosting the event with North Macedonia and Montenegro in November.

Her parents and grandparents didn’t play it, but Katarina Pandza and her two younger sisters got infected by the handball virus at a young age in Vienna.

Meanwhile Katarina and Ana are playing together in Austria’s under-20 team, while Ana and the youngest sister are part of the youth team of Austria’s leading club, Hypo Niederösterreich.

Katarina Pandza was dreaming of becoming handball professional at an early age. Combining her talent with hard work, she has worked her way up and, still at the age of just 19, is a member the Austrian national team.

Even more so, she has already competed at her first major tournament: the IHF World Championship 2021 in Spain last December.

At the age of 17, Pandza made a huge step to accelerate her career: leaving home in Vienna and going abroad, joining German Bundesliga team TuS Metzingen.

“I exactly knew what I wanted. And now, three seasons later, I know that this was exactly the right step for my future. We have many talents in our club, which cares a lot about young players,” says Pandza, who has recently extended her contract with Metzingen until 2024.

In 2019, she became top scorer of the W17 EHF EURO in Slovenia with 66 goals. Her name made the headlines, and Pandza had her debut in the Austrian women’s national team age age 17

In 2021, she was also the best scorer at the W19 EHF EURO, again in Slovenia, with 68 goals. She became part of the EHF ‘Respect Your Talent’ programme – though she had to miss the RYT Camp in Vienna last December as there were just too many matches to be played.

Pandza will be part of the Austrian team that meet Faroe Islands twice for a double-header in group 2 of the Women’s EHF EURO 2022 Qualifiers this week, with the match in Torshavn on Wednesday at 20:00 CET and the match in Maria Enzersdorf on Saturday at 17:30 CET (both live on EHFTV).

And if that were not enough to look forward to, Pandza will also be playing for the under-20 national team this week, seeking a spot at the Women’s U20 World Championship 2022 in a three-team qualification event in Hollabrunn. Austria play Lithuania on Friday and Netherlands on Sunday. Only the winners of this event qualify for the finals tournament in Slovenia in June and July.

The start to her busy week got a delay when the Austrian team got stuck at Copenhagen airport on Monday and had to stay overnight in the Danish capital instead of getting to Faroe Islands.

Pandza is aware four points against Faroe Islands are a must for Austria to remain in the race for the EHF EURO, with the currently on just one point from a draw against Romania and a defeat against Denmark. 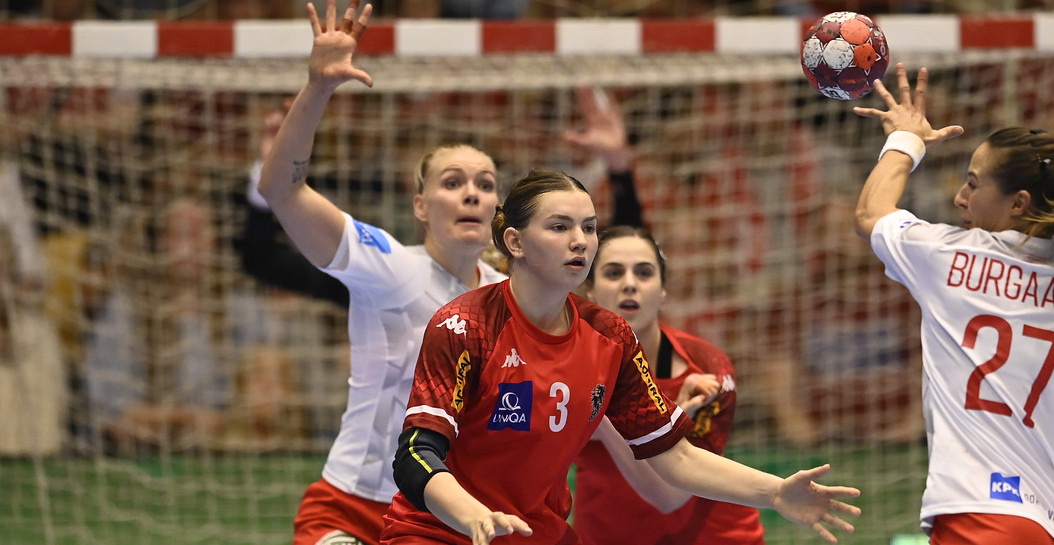 I exactly knew what I wanted. And now, three seasons later, I know that this was exactly the right step for my future. We have many talents in our club (TuS Metzingen), which cares a lot about young players.
Katarina Pandza
Austria (under-20) national team left/centre back

Her debut at a major tournament in Spain a few months ago, where Austria appeared at their first World Championship in 12 years, has made her hungry for more.

“It was such a huge experience to play the World Championship in December, despite all those Covid problems we had in our team: I was infected, our whole coaching staff was ruled out, and many of my teammates as well.” says Pandza, who tested positive even before leaving for Spain.

In the end, Pandza did play in three matches for Austria.

“I was so happy that I could made it. Under different circumstances, we would have finished much better. When you have once played a major tournament, you want to be part of them every year.”

Austria will definitely be part of the EHF EURO 2024, which they co-host Hungary and Switzerland.

“But we aim to play also at the two tournaments before,” Pandza says optimistically.

“Of course, playing an EHF EURO on home ground is something very special. Our team is developing in the right way, we have a good mixture of experience and talent, and handball in general is taking a great development in Austria.”

Pandza calls Domagoj Duvnjak her idol – and THW Kiel, where Duvnjak teams up with Austrian star Nikola Bilyk, “of course” her favourite team.

“I love the way he plays, and I am trying to copy many things from him, mainly from his style in attack,” Pandza says about Duvnjak.

Despite her two top scorer awards, Pandza sees herself mainly as a team player.

“No matter how many goals I score, it is all about the team. I am not the one who is happy with 10 goals regardless the result,” says Pandza, who is a left back, but is also used as a centre back or even a right back by her national coach Herbert Müller, whose brother Helfried is the Austrian U20 coach.

“Both have talked a lot about this upcoming week and how to balance our workload. Nora Leitner and I are nominated for both the women’s team and the U20. We are both eager to play for both teams and we all agreed that the women’s team has priority.”

FEATURE: Respect Your Talent ambassador Víctor Tomás shines his light on the young stars of the Machineseeker EHF Champions League

Talents enjoy summer of inspiration at Respect Your Talent e…

FEATURE: Over 30 players attended the Respect Your Talent workshop in Gaia on Thursday, learning from the best how to improve their careers

Tomas teaches what makes a great player for RYT

FEATURE: With ambassador Victor Tomas, the Player of the Match award recipients at the M20 EHF EURO 2022 improved their skills on Thursday