The impact and evolution of pace

This is the last in a series of articles by data analyst and journalist Julian Rux on the use of technology and data at the Men's EHF EURO 2022.

Memories are still fresh of how Sweden beat Spain in the final of the Men's EHF EURO 2022 last Sunday. Looking for reasons how and why Glenn Solberg’s team was able to take the gold medal, the very good shooting percentage of 71.8 – clearly above their average of 65.7% – immediately leaps to the eye.

Digging deeper into the data, however, another thing manifests: Led by playmaker Jim Gottfridsson, the Scandinavians were once again able to dictate the pace of the game in their favour, a prominent pattern in most of their matches at EHF EURO 2022.

The reasons for this can be manifold. In the case of Sweden, it seems to be both a part of their game plan and a sign of good defence; Sweden had in fact the second-best defence with 25.5 goals conceded per 50 possessions.

For the final, the Sweden’s numbers were similar to their averages with 36.1 seconds per possession for them, while Spain needed 37.9 seconds. However, for Jordi Ribera’s team, these numbers are reversed from normal: Over the whole tournament Spain had similar but not that distinct possession length statistics as Sweden.

The evolution of pace

The EHF EURO 2022 of course hasn’t been the first tournament where pace was a decisive factor. There is no accurate data available for EHF EUROs before 2016, but except for the first two European Championships in 1994 and 1996, there is enough data that allows quite accurate estimates.

These numbers show that 22 years ago, the number of possessions per team and game was about the same as today. However, until 2004 there has been a strong increase and from 2006 an almost linear decline until the last years where the pace per game has been at the same level. At the EHF EURO events in 2004 and 2006, at the height of the 'fast throw-off,' the games had almost 20 per cent possessions more than today. 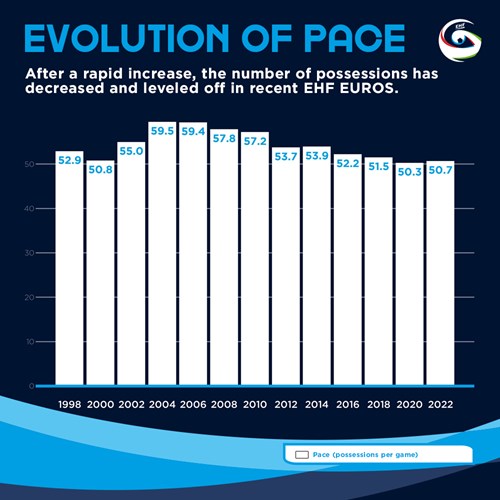 The reasons for this development are multifaceted. On the one hand, back then the focus was more on pushing pace while today it is about dictating and controlling pace to get the best possible shot.

There is obviously a correlation to the fact that the least efficient shots in handball, shots from nine or more meters, are taken less and less. Today, fast bad shots just for the sake of pace are dispensed with. First, second and third wave fast breaks are, of course, still integral for a good offence and produce very high-efficient scoring opportunities. But if no good fast break opportunities occur, it might just take some time to get the best possible scoring opportunity.

On the other hand, coaches have adapted more and more to the faster game and the transition to defence has improved accordingly. The heavily increased workload of the top stars certainly plays a role in this development as well. In addition, changes in rules and refereeing such as the six-pass rule might have contributed as well.

Instead, looking at how many possessions were actually used successfully, the picture is different. In 1998 just 23.0 goals were scored per 50 possessions. Since then, at almost every EHF EURO a new efficiency record was set. The EHF EURO 2022 was no exception: 26.9 goals per 50 possessions on average is the new record.

This development can be attributed to the increasing shooting percentage which, in turn, is also due to the reduced number of backcourt shots. The number of turnovers, in contrast, remained relatively constant over the years.

So, it seems clear that only pace does not allow conclusions to be drawn about efficiency and success. A look at the main round teams of the EHF EURO 2022 confirms this. In the pace ranking, the four semi-finalists are evenly distributed at the top, middle and bottom amongst main round teams. All four obviously were successful and better than average in goals and goals conceded per 50 possessions.

Simply pushing for more and more pace, therefore, doesn’t seem to be the key to success. Instead, controlling and using it in the way that fits the team in the best way possible seems to be.

Previous Article Debelic: “These two years have been the best in my career”

Breaking down the EHF EURO 2024 qualifiers

FEATURE: Following last week’s draw event, we now know the path to Germany 2024 for the 32 contenders

GROUPS A, B & C PREVIEW: EHF EURO 2022 will see plenty of action on its first day, with Hungary and the Netherlands playing in Budapest

GROUPS E & F PREVIEW: Past champions Sweden and Spain clash in Bratislava, while Norway aim for a main round berth

Neighbours battle for points in Debrecen and Szeged

Relive the EHF EURO excitement with the final podcast episod…

PODCAST: The last episode of the official EHF EURO 2022 Un(informed) Handball Hour podcast looks back on the dramatic final weekend in Budap…

TALKING POINTS: No victory on the final weekend of the Men’s EHF EURO 2022 was easy — and we are left with plenty to discuss

GROUP I PREVIEW: Iceland and France both have the chance to join Denmark in the final weekend, but only one can progress

GROUP II PREVIEW: Sweden and Norway will clash in the last game of the main round with a semi-finals berth on the line