All teams hoping to qualify for the Women’s EHF EURO 2022 know which obstacles they are going to face on the road to Slovenia, North Macedonia and Montenegro.

The draw for the qualifiers, which took place in Vienna on Thursday, determined the six four-team groups, with the top two of each group advancing to the finals tournament.

And that mission is not going to be easy for any team involved once the qualifiers throw off in October 2021, as four players pointed out in Instagram Live interviews with EHF journalist Chris O’Reilly shortly after the draw.

Croatia “surprised to see the group we are in”

“I was surprised to see the group we are in,” said Croatia line player Katarina Jezic, after her team was drawn in one section with France, Czech Republic and Ukraine.

“It will be tough to reach the second or first position of this group. We have to take all opponents really seriously and prepare well for the games.”

Jezic was particularly looking forward to the clashes with France.

At the EHF EURO 2020 in December, eventual silver medallists France halted the impressive run of Croatia with a 30:19 drubbing in the semi-final.

“It is my wish to play a better game than we did at the EURO,” Jezic said. “Of course, they are a great team, I love to see them playing, but I think we could have done more against them. We are ready to show that.”

Croatia still ended up winning a bronze medal at EHF EURO 2020, and Jezic believed the team is ready for more success.

“We did really a kind of a miracle in this competition, but we deserved it,” she said. “We missed some players, but we didn’t think about this. We just enjoyed the moment and we had a great team spirit, just going day by day. No matter who we played against, we had a lot of confidence and just played.”

An extra incentive of a successful qualifying campaign for Croatia would be the opportunity to play in almost home-like conditions with the event taking place in neighbouring countries.

“After this bronze medal, people in Croatia are more interested to come and see us,” Jezic said. “We are really close to these countries and I really hope people will be able to come and support us.” 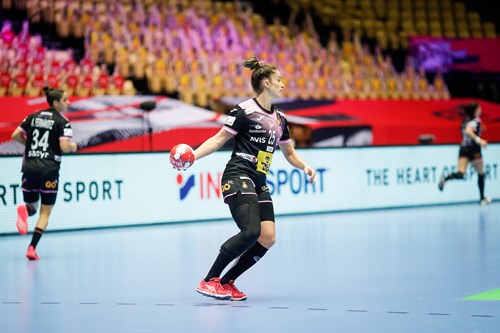 Spain and Hungary to meet in “a big fight”

In another group, Spain and Hungary are going head to head, with Slovakia as a third opponent.

“It is always nice to play against them. Although they are a tough opponent. We will have to make all in our power to make it through,” said the centre back.

While the EHF EURO 2022 Qualifiers start in October, Spain will be hosting the IHF World Championship just a few weeks later.

“We will need tough matches to prepare for our home World Championship,” Pena said. “These matches against Hungary and Slovakia might help us and it is fine for us to be in a tough group.”

One of her upcoming opponents, Aniko Kovacsics of Hungary, was hoping that her team get a boost from their recent qualification for the Tokyo Olympics.

“We just had a great weekend in the Olympic qualification. It was a life-time dream, now it came true. It’s great that we can be there,” said Kovacsis, who was a teammate of Pena’s during the Spaniard’s time at FTC.

“Both are good opponents, but we should be at the EURO 2022,” she added. “Spain have a great team, Slovakia are improving. With Spain it will be a big fight. Every single game is really important, and we want to reach the first place.”

Elsewhere, Iceland will face the likes of Sweden and Serbia in group 6.

“It’s a really tough group. We have to play our best to get points from these teams,” said Iceland centre back Karen Knútsdóttir.

“We have some really promising talents and we have a good atmosphere in the team. It’s 10 years since we last qualified and a lot of things have to work out for us to qualify again.”

Next Article Micijevic: The child of war refugees who loves to smile

DRAW REVIEW: The six qualification groups for the 12 tickets to the Women’s EHF EURO 2022 have been drawn in Vienna on Thursday

POWER RANKINGS: With two days to go until the start of the EHF EURO 2020, Norway sit at the top of the power rankings – but teams like Nethe…

DRAW PREVIEW: The six four-team groups in the Women’s EHF EURO 2022 Qualifiers will be drawn on Thursday

NEWS: Say hello to the look for the Women’s EHF EURO 2022 – and find out what it represents

First step towards 2022 revealed for 11 nations

NEWS: Draw for qualification phase 1 of the Women's EHF EURO 2022 made on Wednesday morning.

NEWS: The draw for qualification phase 1, featuring 11 teams, is scheduled for 17 March

Four tales from a remarkable week of qualifiers

All tied between Czech Republic and Russia

GROUP 3 REVIEW: Russia managed a comeback and even almost got an away win against the Czech Republic, but missed a last-second chance on an…

GROUP 3 REVIEW: After an important win against the Faroe Islands, 26:25, Ukraine are a step closer to EHF EURO 2020