Beach EURO Live: Title holders Denmark back in both finals

The Beach Handball EURO 2021 in Varna has entered its business end Saturday with the quarter- and semi-finals in both the men's and women's event.

It's that time of day again when we have to draw to a close this wonderful, breathtaking, dramatic day here in Varna. BUT! Before we do - since you've been with us all day (thank you, by the way) - you deserve to watch the highlights from the men's and women's action today.

So, enjoy and prepare yourselves for tomorrow. We'll be live from 10:00 CEST with live coverage and a host of features and videos ahead of the two fascinating finals to this EHF Beach Handball EURO 2021.

What a day of top-class beach handball, this had it all! Read all about it in this review:

DAY REVIEW: The defending champions in the men’s and women’s event are back in both finals of the Beach Handball EURO

Are Denmark up for the double again? The Scandinavians won both the men's and the women's title in 2019 and return to both finals in 2021.

But there is different opposition this time: the men face Croatia, the women Germany, two sides who have been impressive also the whole week.

What a pair of promising finals on Sunday!

It is CROATIA vs DENMARK in the men's final!

Denmark have to dig so, so deep to get past a determined Russia side, but they ultimately do as as Ronnie Vilstrup Andersen saves a second Russian attempt in the shoot-out for an 8:6 win.

Congrats to Croatia! They go for their record-extending fifth men's title tomorrow after beating Spain 2:0 (25:24, 28:20) in the semi-final. Lucian Bura impresses with 23 points.

But who do Croatia meet in the final? Denmark and Russia are heading into a shoot-out in the other semi after the defending champions win the second set 19:16.

Wow, what a comeback from Russia to take the opener from Denmark, 18:16. The other semi is even closer, as Croatia edge Spain 25:24 with Lucian Bura scoring more than half (13) of his team's points. 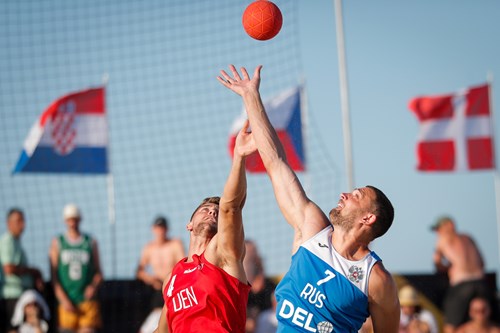 We are off and running! The battle for a ticket to Sunday's men's final is on.

What a pair of semi-finals we have coming up: the four teams combine for 10 of the 11 previous champions in Beach Handball EURO history!

OK, here is a quiz question for you (*): name the team missing in this line-up? 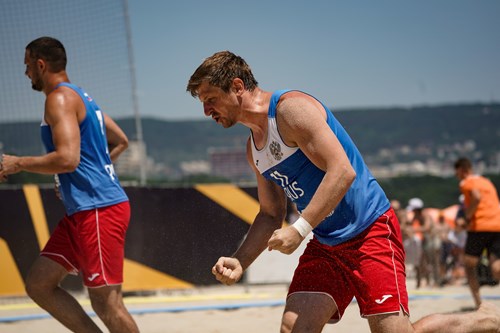 Croatia hold the record with four titles ahead of Spain with three – but what about two-time champions Russia? They are appearing in their 10th semi-final, and they lost only two of their previous nine.

And Denmark? They won once – but the most recent one, in 2019, and are unbeaten this week.

(*) Answer: Only the very first champions – Belarus in 2000 – are missing in this semi-final line-up.

Bring the boys on the beach for the semi-finals starting at 18:00 CEST:

No time to waste as we head straight over the men's semi-finals!

Well, let me share one quick side story: Dutch player Silas Speckmann has just scored a dazzling 32 (yes, thirty-two) points for Netherlands in their 2:1 win over Greece in a 13-16 cross match. Incredible performance! 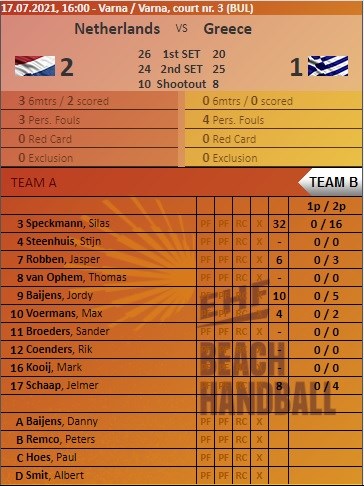 It is DENMARK vs GERMANY in the women's final!

Germany recover from that disastrous second set in their semi-final and beat Spain in a nervy shoot-out 5:2.

Indeed, a shoot-out between Germany and Spain will determine the second finalist! 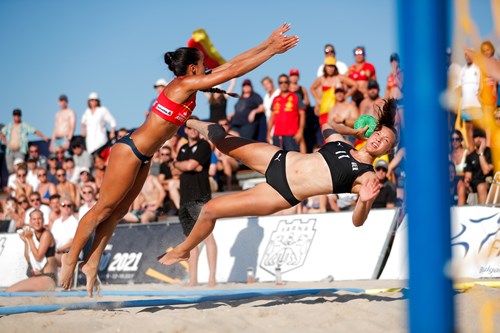 The 2019 champions are the first team through to this year's final, beating Norway 2:0 (23:18, 22:18). That looks easy? Well, it has been everything but easy! Norway are four up halfway through the second set but fail to hold on.

Who are Denmark going to play? The other semi is still going on and likely going into a shoot-out.

A close affair and the momentum shifted several times, but Denmark take the opening set against Norway 23:18, with Line Kristensen contributing no less than 15 points. 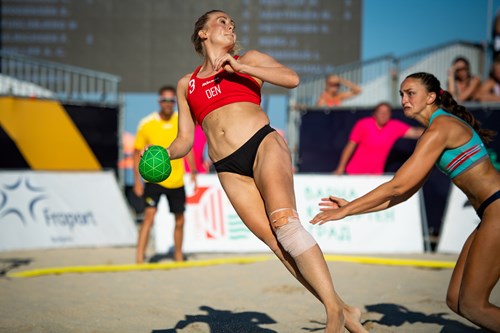 In the other semi, we see yet another team that has played three finals and won it once before - Germany, who were the champions in 2006, when many players from the current squad were only just out of kindergarten.

Their opponents, however, are aiming for a first: Spain have not been to a final before, losing both semi-finals they played in 2015 and 2017, though they ended up taking bronze on the latter occasion. 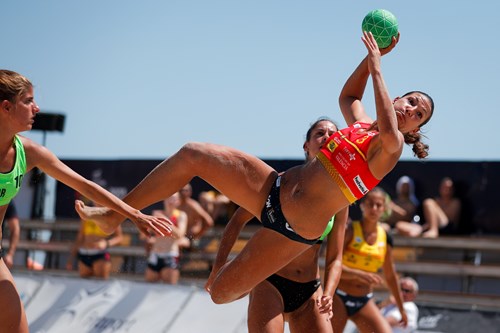 Let's have a closer look at both semis, starting with the Nordic derby.

Stats-wise, not much is separating those teams. Both Denmark and Norway have been to a Beach Handball EURO final three times before, and both have won it once: Denmark in 2019, Norway two years earlier. 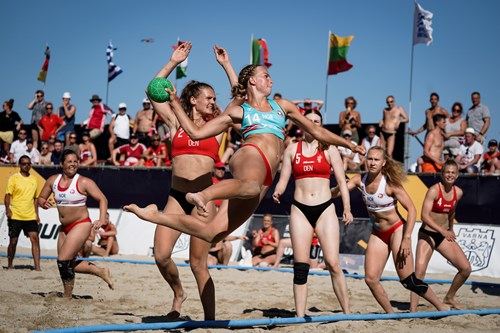 Welcome back! It is time to put our game face on. Just half an hour left now until the women's semi-finals start:

Here is an overview of what has been, and what will be today: 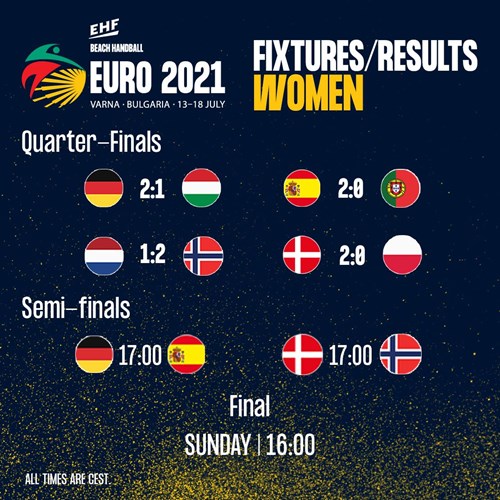 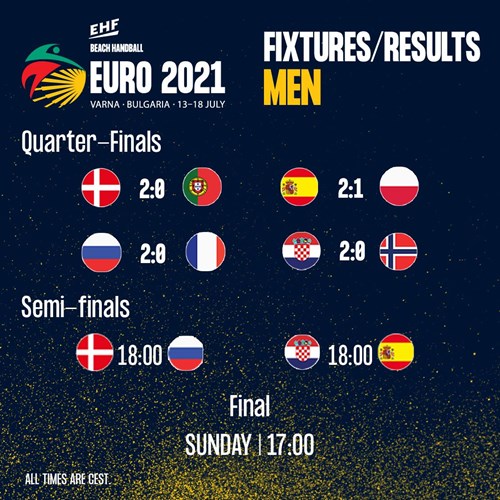 Wow, what an intense two hours of quarter-final action!

Judged by the eight matches we have just seen, it is so hard to predict who will raise these coveted trophies tomorrow.

We could still end up with another Danish double like two years ago, but you cannot rule out any of the other six teams across the men's and women's competitions.

Can't wait for the semis! 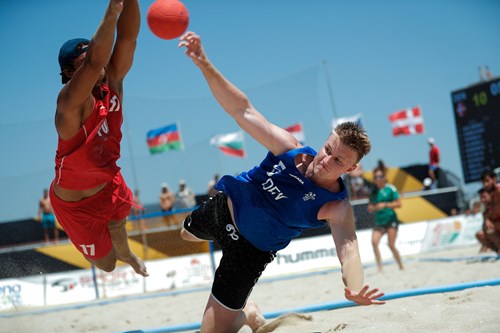 And congrats to Spain! They overcome Poland 2:1 after two tight sets and a 12:10 win in the shoot-out. Good stuff!

That completes the men's semi-final line-up for 18:00 CEST:

Russia (defeating France) and Croatia (beating 2019 runners-up Norway) are the first to book their semi-final ticket, quickly followed by Denmark, all with 2:0 wins.

It is a scrape in the second set for the defending champions, but Denmark just get through against bravely battling Portugal on a last-second goal from Simon Moss.

"We were not as calm as in the earlier matches," Denmark's Joachim Trend Hansen tells EHF's Márcio Menino, giving all credits to underdogs Portugal for pushing them to the limit in the second set.

That is how knockout matches should be! 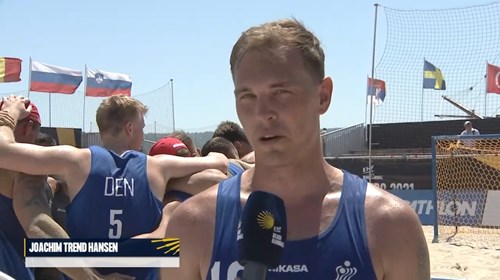 Two clear first sets, two close ones: Denmark (against Portugal) and Russia (against France) win by big margins, Spain (against Poland) and Croatia (against Norway) only by two or three points. 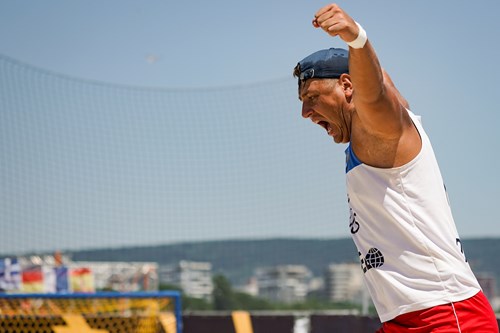 So, the higher-ranked teams from the main round have the early advantage.

All to play for in the second sets!

Game on! The men's quarter-finals have thrown off just now.

The Top 5 Plays from Friday, this will get you really fired up for the men's quarter-finals (if you not already were):

Isabel Kattner rises to the occasion to send Germany through! She blocks two Hungarian attempts in the shoot-out to allow Lucie Kretzschmar score the decisive point.

The first time Germany have been pushed to a shoot-out this week, but they come through with flying colours. 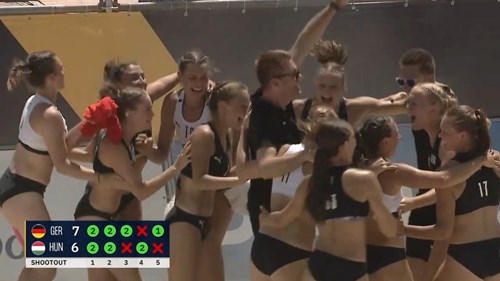 So, after the bronze medallists (Netherlands), we will now also proceed without the silver medallists (Hungary) from 2019.

Norway! They are the third team through, beating Netherlands 8:4 to book their semi-final spot.

Welcome to the semi-finals... Spain and Denmark! They both win 2:0.

Different story over on court 1, where Hungary snatch the second set against Germany, and court 3, where Netherlands take the second against Norway. Both matches going into a shoot-out.

Goals galore in the first sets!

It is an early advantage for Germany, Spain, Denmark and Norway, who all go 1:0 up in their respective quarter-final.

Can Hungary, Portugal, Poland and Netherlands turn the tide? Find out live on EHFTV! 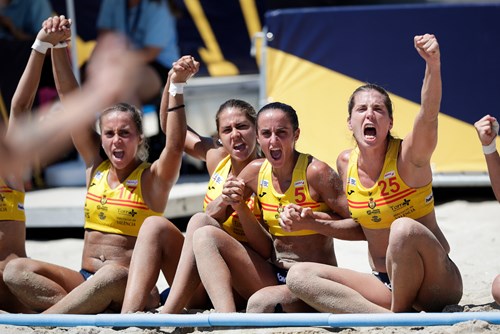 It's on! The women's quarter-finals are starting now!

Just over an hour from now, those man's quarter-finals are on:

So, the 2019 gold (Denmark) and silver medallists (Norway) are still on track, but the bronze winners (Hungary) just failed to make the cut in the main round.

Exciting to watch how this will pan out!

The women's quarter-finalists are preparing for their matches... which gives us time to quickly look ahead to the men, who will take the courts right afterwards.

Like in the women's competition, the men's defending champions are Denmark, so we caught up with the brilliant Vilstrup Andersen brothers. Read what Martin and Ronnie had to say:

To get you in the mood for the women's quarter-finals: here are the Top 5 Plays from Friday, and I am sure there is more to come like this today:

In 45 minutes we start with the women's quarter-finals, and we have quite a line-up for you:

So all medallists from 2019 are still on board, with Denmark (gold), Hungary (silver) and Netherlands (bronze). Are they going to make it to the medal matches again? 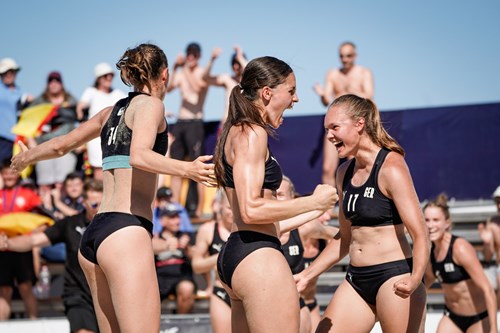 Before we dive into today's schedule, you can quickly get yourself up to date on what happened Friday, when the main round finished in dramatic fashion:

Quarter-finals set in Varna after thrilling end to main roun…

DAY REVIEW: The starting grid for the knockout phase of the Beach Handball EURO in Varna has been confirmed

Good morning and a - literally - very warm welcome to Varna! The sun is out in full force here like all week, and so will our quarter-finalists over the next few hours.

Yes, we are entering what they call the business end of the Beach Handball EURO 2021, the stage where no mistakes are allowed anymore. This is the knockout stage.

It is ladies first, they will play their quarter-finals at 11:00 CEST, followed by the men an hour later. 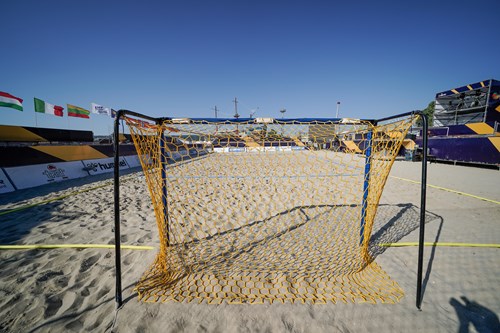 Next Article Denmark on double duty again on finals day

NEWS: €1,500 will be given to a major international sports foundation

Wiederer: EHF will do its utmost to influence beach handball…

OFFICIAL STATEMENT: The disciplinary body of the Beach Handball EURO 2021 sanctioned a breach of the Athlete Uniform Regulations

MEN’S FINAL REVIEW: The reigning champions put in a dominating performance to win gold again at the Beach Handball EURO

Meet the finalists: Will Denmark or Croatia grab gold?

MEN’S FINAL PREVIEW: The reigning champions meet the record champions in the men’s final of the Beach Handball EURO 2021

Meet the finalists: How do Denmark stack up against Germany?…

WOMEN’S FINAL PREVIEW: The defending champions meet the 2006 winners in the women’s final of the Beach Handball EURO 2021

SUMMARY: Coverage of the sixth and final day of the Beach Handball EURO 2021 in Varna

DAY REVIEW: The defending champions in the men’s and women’s event are back in both finals of the Beach Handball EURO