Can Ystad also surprise in the European League?

Ystads IF are new to the EHF European League Men, after finishing fourth in the regular season of the Swedish league last season but delivering a masterclass in the play-offs.

The Swedish side can be a dark horse against teams that might look stronger on paper.

Most important question: Can they make the cut in the EHF European League?

Sure, it is a question everybody asks, but can a side with little to no European experience at this level perform against more seasoned opponents? Ystads IF truly surprised everybody in Sweden when they took the title last season, with a strong performance in the play-offs.

Beating both IK Sävehof and IFK Skövde 3-1, including a 47:46 win after a shoot-out in the last match of the final was a huge achievement for Ystad, who have not made serious changes to the squad.

But adding at least 10 more European games to the load will surely be difficult to cope during the season, especially as the reigning champions have started the Swedish league with three consecutive losses.

The team is already stretched thin and they will surely face difficult opponents, but if there is one thing Ystads IF have plenty of is motivation. Back Jonathan Svensson has started the season with a bang, scoring 21 goals and dishing 13 assists in the Swedish league, as the 24-year-old will be crucial for his team in the next matches.

Under the spotlight: Kim Andersson

Named Swedish player of the year three times – in 2007, 2008 and 2012 – Kim Andersson is one of the best players of his generation. The 40-year-old right back started to play handball at Ystads IF, where he played between 1998 and 2001 before moving to IK Sävehof.

Spending seven years at THW Kiel, Andersson secured the EHF Champions League Men once, in 2007, and he also was a member of the Sweden squad that clinched the silver medal at the London 2012 Olympic Games. 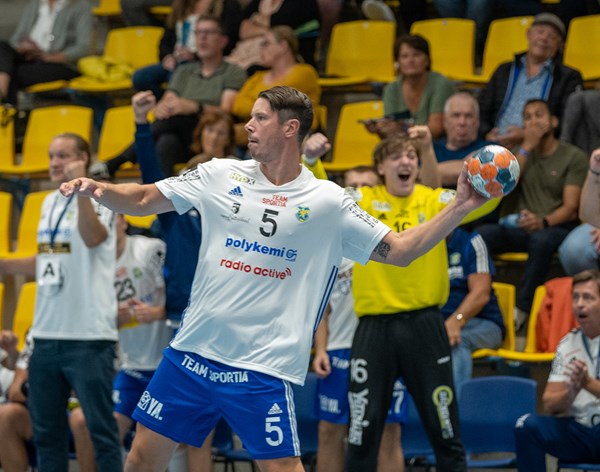 He came back to Ystad in 2015 to finish his career, but he actually extended it until now, entering his ninth consecutive year with the Swedish side. Sure, Andersson is not the force he used to be, but he still scored 59 goals in the past season in the domestic league, helping his side secure the title for the first time in 30 years.

“The biggest motivation this season will be to defend the league title and to play in the EHF Europa League and measure ourselves against bigger clubs and better opponents,” said the team’s captain, Jakob Nygren.

“Many say that in Ystad, handball is not just a sport, it is a religion,” writes the official website of the Swedish champions. Judging by the fact that they are the oldest team in the competition, with their handball section being founded in 1929, the point is surely taken.

56% – the percentage of wins secured by Ystads IF in European competitions – 28 wins, four draws and 18 losses in 50 matches played in the EHF Cup, Challenge Cup, and European Cup.

DAY REVIEW: Podravka and Molde without a chance of going through, Siófok extend positive streak

DAY REVIEW: The German side reached the quarter-finals of the EHF European League Women after a thrilling draw in Romania

Mari Finstad Bergum: “Some positives can come out of the tou…

FEATURE: While Neptunes de Nantes are not getting the results they want on the course, their Norwegian left-back is trying to see all of thi…

Graz and Flensburg to host this season's EHF European League…

NEWS: The women's event will be decided in Austria for the first time, while the men's competition returns to Germany

ROUND PREVIEW: Unbeaten THC, Sola and Ikast can already book their place in the quarter-final with a win this weekend

Moreno: “Benfica is one of the loves of my life”

FEATURE: After playing at the World Championship, the Cape Verdean line player is focussing on the European League again

FACTS AND FIGURES: The medal matches at the World Championship include 42 Champions League and 21 European League players

TALKING-POINTS: Where do we stand with three rounds to go in the EHF European League Women group phase?

OFFICIAL STATEMENT: The German club shall pay a fine of €10,000 for having displayed unauthorised advertising in the playing hall within the…