On Sunday (live on EHFTV at 14:00 CEST), Málaga play an away match against fellow Spanish side Rocasa Gran Canaria in the first leg of the EHF European Cup Women 2021/22 final.

For Málaga’s right wing Isabelle Medeiros there is no doubt her club wants to defend the trophy they lifted last year, when they beat Lokomotiva Zagreb in the final.

“We knew it was going to be a difficult task, but the objective has always been to reach this final and win it again,” Medeiros said.

Málaga and Gran Canaria know each other well, obviously. For the Brazilian, who turned 28 last month, small details will make the difference in the two-leg final.

“I think those are going to be difficult games, because the two teams know each other very well. The games will be decided over details,” Medeiros said.

Medeiros described her upcoming opponents as “a very well-trained team.”

“We have to try to run and take advantage of our counterattacks, where we are very strong. We know it will be very difficult, especially playing at their arena, but we want to try to take the best result and then decide the final at home,” Medeiros said, referring to the decisive second leg, next week Saturday in Málaga.

Medeiros is in her third European season with Málaga. After scoring 16 and 18 goals, respectively, in the first two years, 2021/22 has become her breakthrough season.

Going into the final, Medeiros is Málaga’s top scorer with a tally of 43 goals, including 15 from the semi-finals against ZRK Bekament Bukovicka Banja of Serbia.

Málaga won both encounters against the Serbian club, while final opponents Gran Canaria were made to work harder in their semi-final against HC Galychanka Lviv. They had to come from behind after losing the first leg, but advanced thanks to a home win in Telde.

“Here in Málaga I grew a lot as a player. I can say that I am a very dedicated athlete: I like to train and I like to learn, it helps me a lot to improve individually,” said Medeiros, who is also a respected international with Brazil, winning the 2017 Pan-American Championship where she was the top scorer and the All-star right wing. 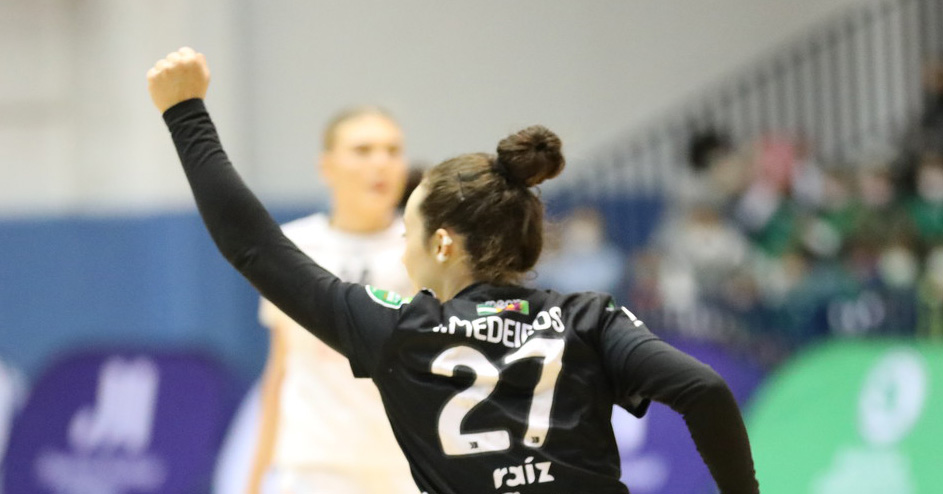 Anxiety, nervousness, confidence. We feel a little bit of all this. I think we are ready and we all know how to face it well during the game. We have experienced players, who help to pass on that confidence among the others.

“Anxiety, nervousness, confidence. We feel a little bit of all this. I think we are ready and we all know how to face it well during the game,” Medeiros said.

“We have experienced players, who help to pass on that confidence among the others. We are ready to play the final.”

GROUP B REVIEW: Flensburg beat Valur 37:32 for their third win in a row, while Ystads won their first game in the group phase of an European…

GROUP C REVIEW: Skjern are the only away team with a win, as Granollers and Nexe continued their perfect streak

OFFICIAL STATEMENT: The team official of the Kosovan club was sanctioned for a blatant display of severe unsportsmanlike conduct in the last…

DRAW REVIEW: 16 pairings of the EHF European Cup Men Round 3 have been drawn

Pots for the EHF European Cup Men Round 3 released

DRAW PREVIEW: 32 teams divided in two pots ahead of the Tuesday's draw

Champions Nærbø weather the storm to reach round 3

ROUND REVIEW: the title holders from Norway struggled at Slovenj Gradec, but showed character to advance to the next stage

ROUND PREVIEW: 30 matches scheduled for this weekend will complete the line-up of round 3

Teams stamp their names on round 3 spots

ROUND REVIEW: Following an action-packed weekend, seven teams have already progressed to the next stage of the EHF European Cup Men

ROUND PREVIEW: new faces will enter the competition at the round 2 stage including defending champions Nærbø IL

All 32 teams know their round 3 opponents

DRAW REVIEW: The EHF European Cup Women is ready for the next phase of the competition following Tuesday’s draw in Vienna