MOTW to Montpellier for top clash versus Aalborg

Just two rounds remain in the EHF Champions League Men 2021/22 group phase, making it well and truly crunch time in the battle for the quarter-final and play-off berths.

In round 13, France will be the site of the Match of the Week for the third time this season, as Montpellier HB host Aalborg Håndbold in a duel that will be pivotal in determining the top positions in group A — and potentially a direct quarter-final berth. 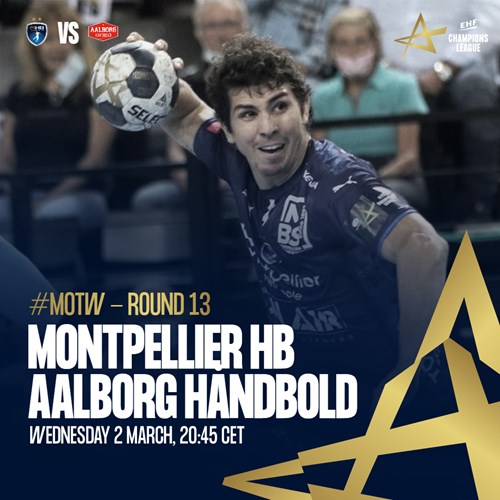 The match will start at 20:45 CET on Wednesday 2 March and be streamed live on EHFTV with English commentary. Fans can also enjoy extensive coverage across all EHF Champions League social media channels and on the eurohandball.com live blog.

2020/21 finalists Aalborg will enter the match as group leaders on 18 points after nine wins and three losses in the group phase. 2018 title winners Montpellier are on 16 points in third, while THW Kiel are in between the two on 17 .

In the reverse fixture back in round 2, Aalborg secured a comfortable win, 36:28. But after that defeat, Montpellier picked up their form and became one of the teams to beat, recording seven runs on the trot before a draw and two losses in the latest rounds. On the other hand, Aalborg won their last five games and seem to be peaking at the right moment in the season.

Including their best result of second in 2021/22, Aalborg have reached the knockout stage three times before, but they have never earned one of the direct quarter-final tickets from the group phase. Montpellier are more seasoned participants in the knockout stage of the top flight but have not progressed past the quarter-finals — or even the group phase, until now — since their title-winning year in 2018.

GROUP B REVIEW: Elverum are a tough nut to be cracked, but Kielce take their fifth straight win

GROUP A REVIEW: After GOG lost in Paris on Wednesday, Magdeburg are now a comfortable third and beat Porto in style

GROUP A REVIEW: Bucharest win crucial home match against Plock and pass their opponents in the ranking

GROUP B REVIEW: After six straight wins, Barça give away their first point in Kiel

Veszprém finish first part of the group phase on a high

GROUP A REVIEW: Thanks to a tight win against Zagreb, Veszprém remain undefeated and will start the return phase as group leaders

SUMMARY: The Machineseeker EHF Champions League has returned with three matches on Wednesday and five on Thursday