The data behind Norway’s attacking prowess

Data provide unique insights in handball matches and players. Data analyst and journalist Julian Rux will share his findings on a regular basis during the Women’s EHF EURO 2022. Today the second episode: a close look at Norway’s outstanding attack

With the highest goal difference, Norway cruised through the preliminary round. Their defence was good – second overall with 19.0 goals conceded per 50 possessions. Especially goalkeeper Silje Solberg has been outstanding so far with 50.0% saves, which ranks her first. But it is once again their offence that is even better.

As in the past two EHF EUROs, the Scandinavians have the best attack so far. In 2018, they scored 27.4 goals per 50 possessions, in 2020 28.1. Currently, they are even better at 29.1. But this figure should still only be compared cautiously with previous years, as the quality of the opponents in the later rounds is higher than in the preliminary round.

Nevertheless, the consistent great offense of Norway is clearly no coincidence. So, let's look a little deeper into the numbers and decode why they are so good.

Norway is good at taking care of the ball. Just 9.4 turnovers per 50 possessions is the fourth best number. But where they are outstanding at is their shooting percentage: 68.9% of their attempts have found their way into the goal. No other team is anywhere near as good.

Particularly impressive here is that they are able to go up a notch in the second half. While most of their statistics are similar in both halves, the shooting percentage improves from 62.8% in the first half to 75.7% in the second.

Accordingly, some of the players also have a very strong individual shooting percentage. Vilde Ingstad is particularly striking, who with 5.7 field goals per game is not only the best field goal scorer, but she also has the best shooting percentage of all high-volume shooters with at least 4.5 shots per game and one game played (89.5%). With Nora Mørk, there is even a second Norwegian player in fourth place. 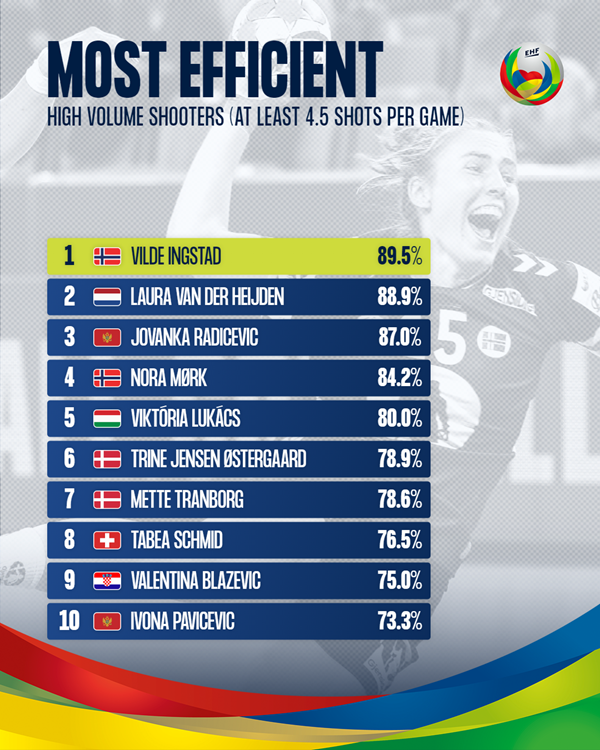 Broken down by the throwing position or type of throw, their success rate from the seven-metre line is the highest. They scored on 14 of 15 (93.3%) attempts. That’s better than every other team and 16.5 percentage points better than the average. From around six metres and around nine metres they are the most and second-most efficient team and score well above average as well.

From these three shooting positions, their share of attempts is about average. The only position they shoot clearly less than the average is from the wings, even though their success rate is above average as well: 62.9%, which is the sixth-best figure.

Surprisingly inefficient are their fast breaks as they scored only on 62.5% (15.0 percentage points below average) even though their share of attempts is the fourth highest.

In comparison to the EHF EURO 2020, the shares of attempts from each position are almost identical. However, for almost every position the shooting percentage has increased, the highest being penalties and shots from around nine metres. The only exception are of course fast breaks where the success rate has decreased by 10.8 percentage points. 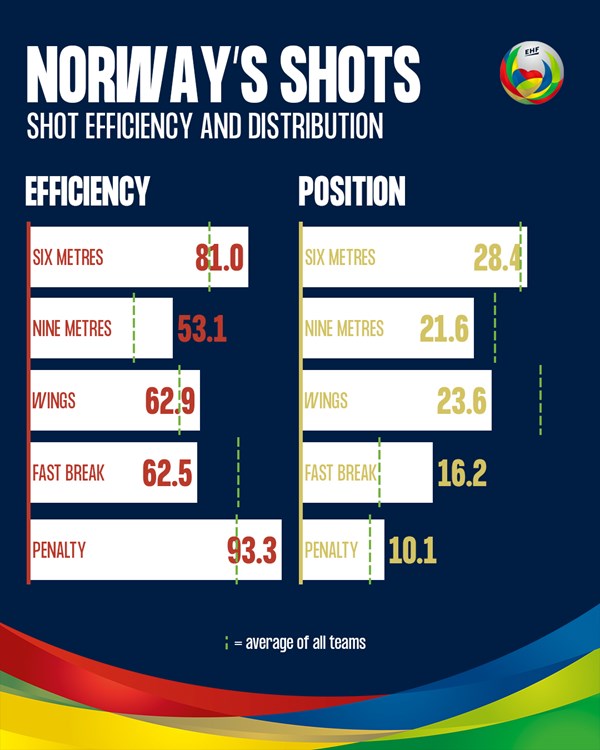 The physical stats are outstanding as well

Their current weakness in the fastbreak is very interesting since they are playing very fast. Together with Netherlands, they have the most possessions per game (58.3) and are just behind them second in possession length (26.0 seconds). In 2020 they even had the shortest possessions.

In this context the number of passes is also remarkable. As two years ago, they are the team with the fewest passes per game, per possession and per 35 seconds in possession. The former is due to their own possession being significantly shorter than their opponents'; the latter is because they play very fast themselves; and the third is an indicator that they tend to rely on isolations rather than passing combinations in longer possessions.

Their other physical statistics are excellent as well. They are the team that has the highest share of springs in the highest category (20.0%), run the fifth-most per game (33.3 km) and jump the second-most per game (123.3). Almost a third of these jumps (30.0) are due to Henny Reistad, who leads the tournament here.

Even though coach Thorir Hergeirsson is missing Kari Brattset Dale, who was the MVP of the 2021 IHF World Championship amongst others, the defending champions look as strong as always. They have been able to manage minutes well from key players so far.

But to really see where they currently stand, we have to wait for the next games. Because the really big tasks will come in the next games. To win it all again they clearly have to improve their fast-break efficiency.

Previous Article This is me: Stefan Kretzschmar

Next Article Seven talking points after the preliminary round

TALKING POINTS: A ninth title for Norway, a perfect farewell for a Montenegrin icon, and returning All-stars headline the final weekend

SUMMARY: Coverage of the final day of the Women's EHF EURO 2022 in Ljubljana

BRONZE-MEDAL MATCH REVIEW: Montenegro took their first medal in any competition after a decade-long wait, as they defeated France 27:25

EHF EURO PODCAST: The podcast, in cooperation with the (Un)informed Handball Hour, delivers the inside stories of the Women’s EHF EURO 2022