Data provide unique insights in handball matches and players. In the second episode on his findings during the Women’s EHF EURO 2022 data analyst and journalist Julian Rux takes a close look at Montenegro’s shots.

On the defensive end things do not look very different. France (18.3 goals conceded per 50 possessions) and Norway (21.5) have the two best defences, while Denmark are ranked sixth (24.4). Montenegro, however, are only eleventh, conceding 25.6 goals per 50 possessions.

Of course, their numbers are somewhat affected by the clear defeat against the Netherlands on Wednesday, in which nothing was at stake anymore for the lionesses, while the Dutch were still fighting for the third place in the group. But even before that game, they were only minimally above average in attack and defence.

Nevertheless, the offense of Bojana Popovic’s team and especially their shot selection is very interesting. Overall, 61.0% of their shots have been successful. They are especially strong from penalty throws where they converted 84.3%. From the field they have made 58.1% of their attempts, which is around the average. Their success rate on first wave fast breaks (75.0%) is average as well.

Even more revealing is a look at their shot chart which shows their efficiency and frequency per area excluding penalty throws and first wave fast breaks (which include empty net throws): 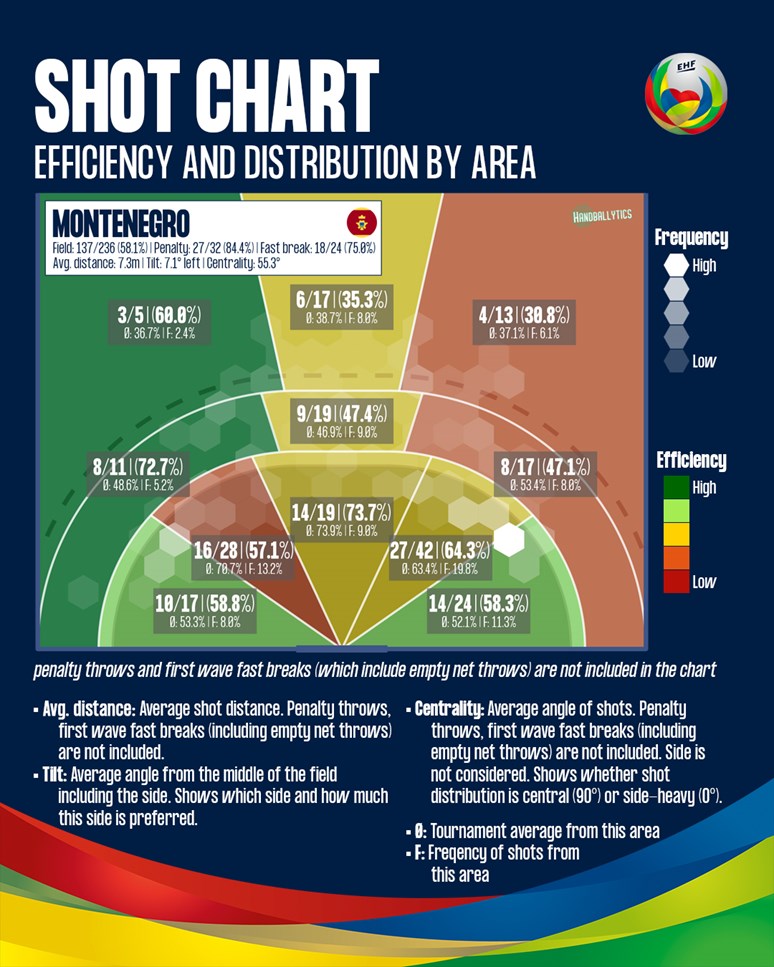 Tendency towards the side

Since Montenegro’s shot distribution overall doesn’t deviate too much from the mean it’s no surprise that their average shot distance is exactly the average of the tournament with 7.3 metres. To measure shot distance the centre of the goal is taken while penalty throws, fast breaks and empty net throws are again not included.

However, the Southeast Europeans are behind the Netherlands the team with the second-lowest centrality (55.3°) among the teams that have played in the main round. This means that regardless of the side, they are shooting from the second-most acute angles on average.

Considering the sides, they have a clear tendency towards the left side (from the direction of play) as their shooting positions have a tilt of 7.1° from the middle to the left. Behind Germany that’s the second strongest tilt to the left amongst all teams that made it to the main round.

Even more interesting are individual players. Montenegrin legend Jovanka Radicevic is with 6.8 goals the second-best scorer per game after Alina Grijseels of the EHF EURO 2022. She is playing an absolutely outstanding tournament. No matter from where she throws, penalty, fast break or any area, from everywhere her efficiency is clearly above average. 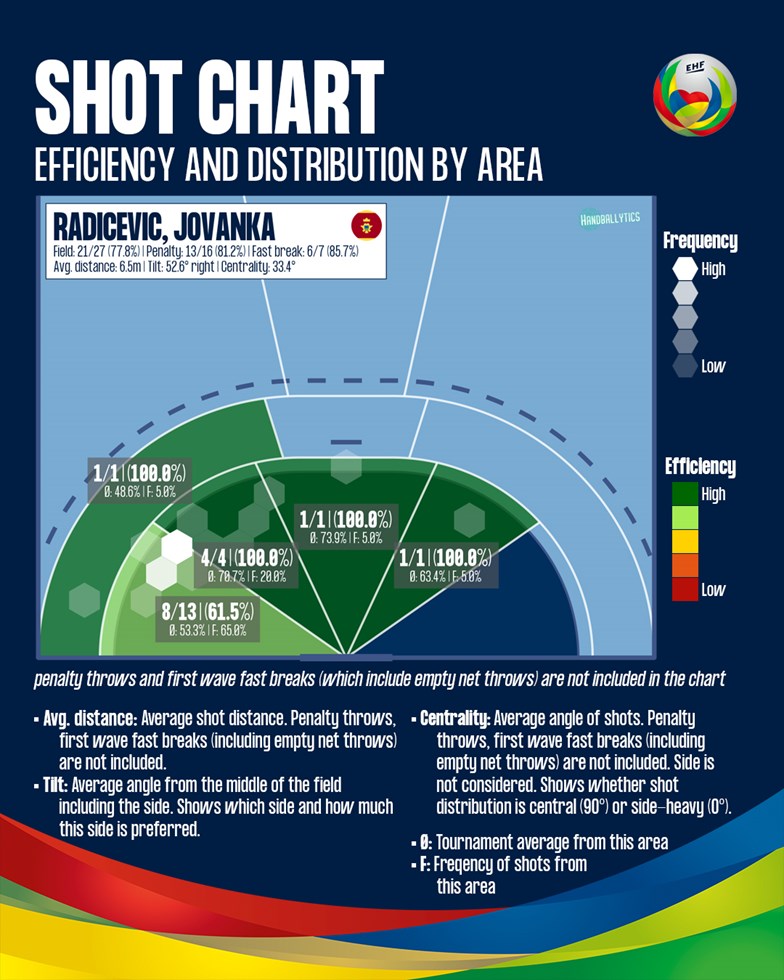 Radicevic’s counterpart on the left wing is Ivona Pavicevic. With 4.0 goals per game, she is the second-best Montenegrin scorer from the field.

She is in no way inferior to the legend as her efficiency is way above average as well. The red area in the centre can be ignored with only one attempt. The two outstanding wings also explain why Montenegro throws from such acute angles on average. 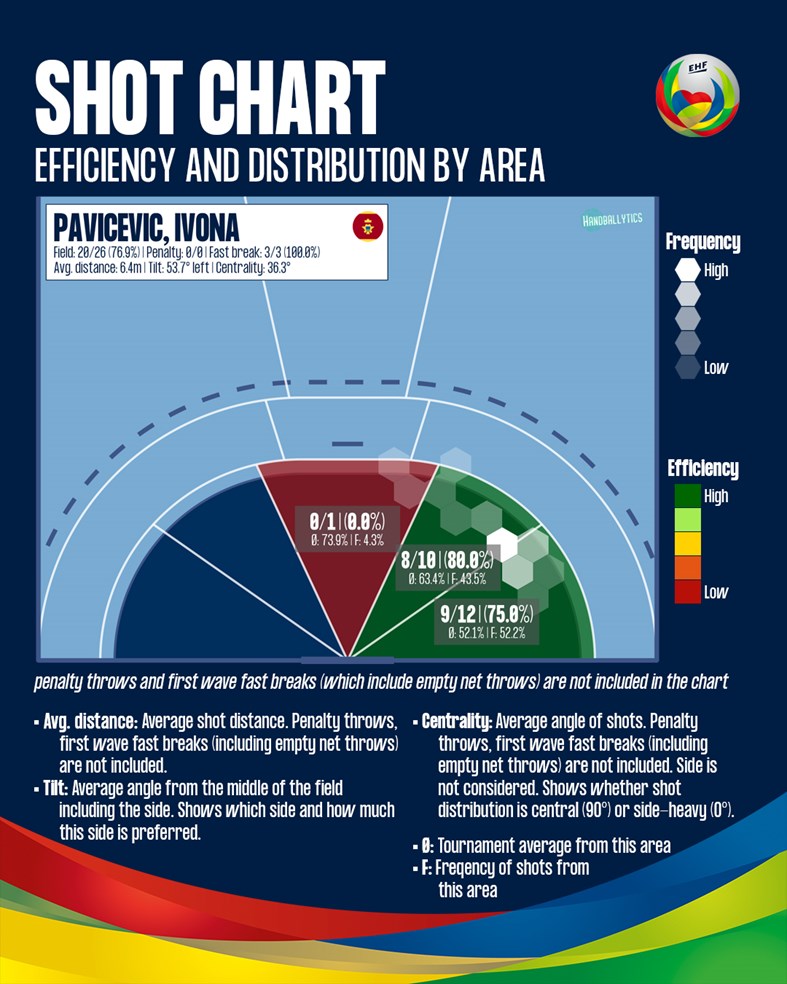 Montenegro’s second-best scorer overall, however, is Djurdjina Jaukovic. With 5.8 goals per game, she is the seventh-best scorer of the EHF EURO 2022.

The left back is shooting penalty throws as well and is doing that very well. Amongst all penalty takers with more than one attempt per game only Nora Mørk’s percentage is better than Jaukovic’s - 93.3%. Out of 15 attempts, she only missed once.

Apart from that, her efficiency numbers are mixed. Altogether, from more than 8.5 meters she is more efficient than average, but not much. The closer it gets to the goal on the left side of the field, the less than average her efficiency becomes. 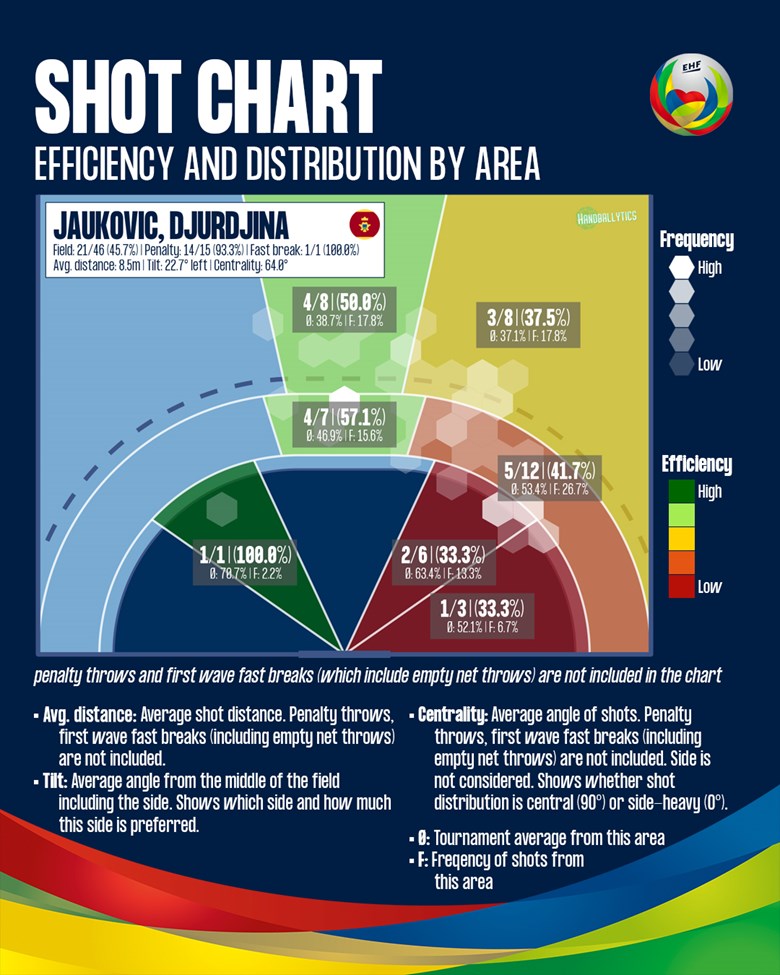 In the encounter with Denmark in the semi-finals, all this could become very relevant. Because the Nordic team, as the numbers at the beginning show, does not have an excellent defence so far. If the stars of the lionesses have an (almost) perfect day, they could take advantage of that. And in knockout games, as we all know, anything is possible.

Previous Article Norway versus France in a rematch – yet again

SUMMARY: Coverage of day 15 of the Women's EHF EURO 2022, with both semi-finals and the match for fifth place in Ljubljana

SEMI-FINAL REVIEW: Denmark defeated Montenegro 27:23 in the opening semi-final on Friday night to book the first place in the trophy game

Norway versus France in a rematch – yet again

FEATURE: The titans clash again, but after several finals, this time already in the semi-final of the Women’s EHF EURO 2022