Stars from the EHF Champions League Women clubs had a huge impact on the final weekend of the Women’s EHF EURO 2022, with 54 Champions League players on court during the two medal matches on Sunday.

Norway retained their European title with a superb second-half comeback against Denmark, partly thanks to the experience of their 14 Champions League stars. Silver medallists Denmark fielded 12 Champions League players – the lowest number among the four finalists.

Bronze medallists Montenegro counted on 15 Champions League players, while fourth-placed France had 13 in their roster.

In terms of clubs, three Champions League participants were represented by both finalists: Györi Audi ETO KC, with two Danish and two Norwegian players; Team Esbjerg, with four players from both Denmark and Norway; and Odense Håndbold, with three Danes and one Norwegian. No club won the whole set of medals this time.

Thanks to nine Montenegrin bronze medallists, Buducnost top the club ranking with nine players in the medal matches, ahead of Brest and Esbjerg (eight each). Esbjerg’s coach Jesper Jensen steered Denmark to their first EHF EURO final after 18 years, and Buducnost coach Bojana Popovic won the bronze medal with Montenegro on her 43rd birthday. Meanwhile 14 of the 16 current group phase participant clubs were represented on court on Sunday.

Including top scorer Nora Mørk, only one of the nine players on the All-star Team does not play for a Champions League club – Ikast Handbold left wing Emma Friis. Esbjerg are represented by the MVP (Henny Reistad), the top scorer (Mørk) and the best defender (Kathrine Heindahl). Brest have two players among the All-stars, and Györ, FTC, CSM and Krim one player each. 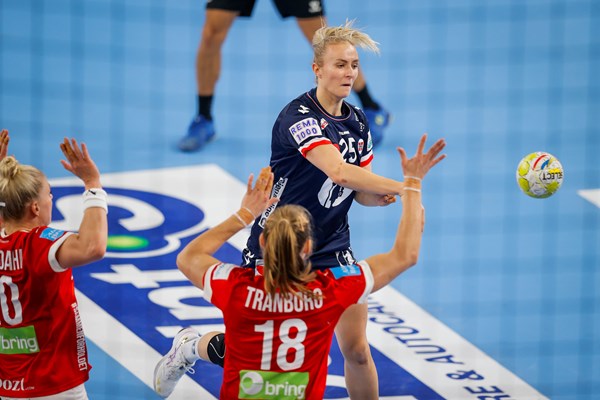 Next Article Montpellier win group A clash to take the lead

GROUP B REVIEW: Elverum are a tough nut to be cracked, but Kielce take their fifth straight win

GROUP A REVIEW: After GOG lost in Paris on Wednesday, Magdeburg are now a comfortable third and beat Porto in style

GROUP A REVIEW: Bucharest win crucial home match against Plock and pass their opponents in the ranking

GROUP B REVIEW: After six straight wins, Barça give away their first point in Kiel

Veszprém finish first part of the group phase on a high

GROUP A REVIEW: Thanks to a tight win against Zagreb, Veszprém remain undefeated and will start the return phase as group leaders

SUMMARY: The Machineseeker EHF Champions League has returned with three matches on Wednesday and five on Thursday