Metz hope rebuilding process can take them to Budapest

In June, Metz Handball reached the EHF FINAL4 Women in Budapest for the second time in their history, after qualifying for the first time in 2019, but the French side still did not reach the final. However, they grabbed third place – their best result in the EHF Champions League Women.

But in the wake of the club's historical performance, many important players chose to leave the club. Captain Meline Nocandy, backs Orlane Kanor and Grace Zaadi Deuna and line player Astride N'gouan left.

And while Metz have only signed four new players, coach Emmanuel Mayonnade will have to find the right balance to take his team to the heights it is now used to.

Most important question: How can Metz cope with so many important players leaving?

Meline Nocandy, Orlane Kanor, Grace Zaadi Deuna, Astride N'gouan and Ivana Kapitanovic — all of these Metz players, whether they stayed at the club for six months or many years, were seen by many observers as being key in Emmanuel Mayonnade's system.

Nocandy was even named captain for her last season with the club, but they all chose to pursue their careers elsewhere and left in the summer. The back court looks particularly empty, as Metz have only signed centre back Kristina Jörgensen and right back Valeriia Maslova.

Judging by the balance of things, the process will not be easy, especially as other European sides have been incredibly ambitious with their summer signings. But Emmanuel Mayonnade is used to working wonders in Metz, as he has done for a few years now, and we cannot wait to see which trick he manages to pull out of his hat this time.

Under the spotlight: Bruna de Paula

Bruna de Paula's first season in the EHF Champions League was an impressive one, as the 25-year-old Brazilian left back netted 52 times for Metz. Irrespective of the level of opposition, she has delivered day in, day out, and sometimes her teammates even appeared to rely on her performances. 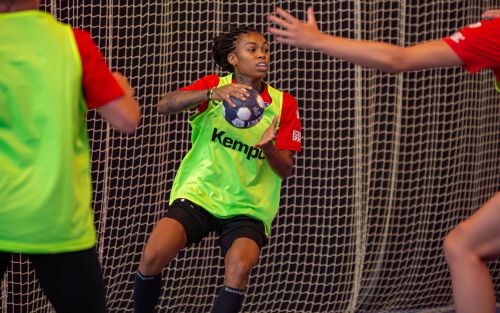 But now that she has been in the spotlight, her opponents will have studied her game and will be waiting for her. The Brazilian national team player will have to reinvent herself to keep delivering in a position where Metz have lost important players.

"I trust Emmanuel and his staff to keep the miracle going," said Metz president Thierry Weizman. Weizman used the word "miracle" on purpose, as many observers do not necessarily rate his club as being one of the favourites to reach the EHF FINAL4 Women, yet they have already delivered twice.

During the group phase, Metz will have to face Györi Audi ETO KC, as well as last season's EHF FINAL4 participants Team Esbjerg and ambitious newcomers CS Rapid Bucuresti. Metz's ability to finish in a good spot in group B will shape their chances of making it far this season.

Metz will have to play their first two home games away from their normal home. Their traditional arena, "Les Arènes", will be busy with a tennis tournament, which takes place every September. To fulfil their duties, Metz will move to Nancy, 30 kilometres away.

In Nancy, they will host Storhamar in round 1 before welcoming Györ two weeks later. That may not be too much of a bad thing from a sporting point of view, though, as Metz defeated Vipers Kristiansand in the same arena in Nancy last season.

24 seasons out of 29 played is the impressive ratio of Metz's participations in the EHF Champions League Women. From the participants in the upcoming season, only WHC Buducnost BEMAX and Krim Mercator Ljubljana have played more editions.

Despite so many attempts, the team from Lorraine is still waiting for its first Champions League trophy. But reaching the EHF FINAL4 twice in the last five years definitely proves that Metz are on the right track to become the first French side to lift the trophy in the near future.

GROUP B REVIEW: No points for Elverum despite an outstanding performance against the 2022 Champions League finalists

Szeged profit from strong first half

GROUP B REVIEW: A 36:28 away win at Celje is the third victory in the last four matches for the Hungarian champions

LIVE BLOG: Running coverage of the eight matches in round 8 of the Machineseeker EHF Champions League 2022/23 group phase

Cavalcanti: “Nantes have the quality to beat the best teams”

FEATURE: The Portuguese international and his French club meet Aalborg Thursday in a repeat of last week’s MOTW

How efficient Kiel's seven against six really is

Classic rivals clash again in star-studded Match of the Week

ROUND PREVIEW: Barça face Kiel in a repeat of last week’s draw, while the PSG and Kielce hope to claim top spot in their groups