Ahead of the finals at the EHF EURO 2022 on Sunday, the All-star Team for the event is revealed. Six teams are represented among the eight positions plus MVP of the championship held in Slovenia, North Macedonia and Montenegro.

The team was decided based on thousands of votes from fans and a panel of EHF experts.

The MVP was chosen by the panel, who picked Norway back Henny Reistad based on her all-round performance, which included an important role in both defence and attack. Reistad enters the final day in the running for the event’s top scorer crown as well, with 43 goals, which puts her second ahead of the medal matches. She is among the frontrunners for assists, with 22. Only four of Reistad’s goals have been penalties, which places her as the top scorer from the field at the EHF EURO 2022.

It is Reistad’s second MVP nod after she was received the award at the EHF FINAL4 2021 when Vipers won their first title, right after she scooped the Best Young Player award for the EHF Champions League. She was also All-star Team left back at the 2021 World Championship. It is Reistad’s first time appearing in the EHF EURO All-star Team.

That is not the case for Reistad’s teammate Stine Oftedal, who has been named All-star Team centre back at the EURO for the third time running. At the end of the last EHF Champions League season, Oftedal was named best centre back for the fourth consecutive time.

Montenegro right wing Jovanka Radicevic, who passed the 200-goal mark at the EHF EURO during the event, has also been named in the All-star Team for the third time, after appearing in the line-up in 2012 and 2020.

But the EHF EURO 2022 player with the most appearances in the All-star Team has an even more impressive record, with her nods spanning 12 years: Romania’s Cristina Neagu, the all-time top scorer of the EHF EURO across both men’s and women’s events, has been included for the fourth time in her career. She was first named in 2010, then again in 2014 and 2016.

The remaining five players are named in the EHF EURO All-star Team for the first time in their careers. 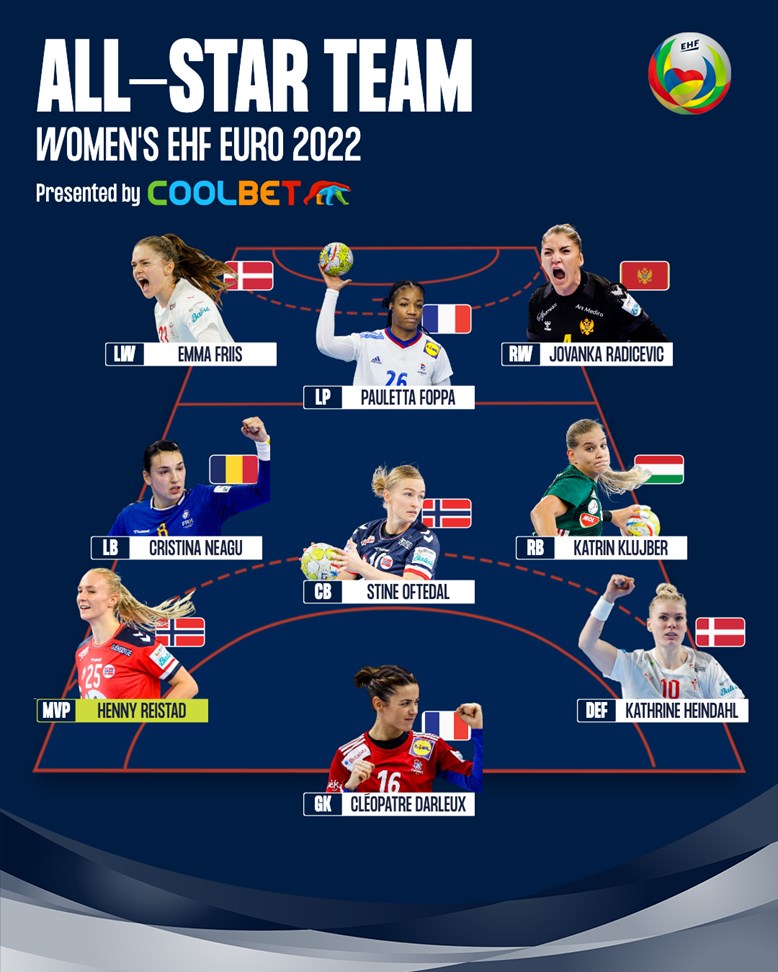 Previous Article Radicevic: Bronze would shine like gold for me

Next Article Stine Oftedal, leader of the young ones

TALKING POINTS: A ninth title for Norway, a perfect farewell for a Montenegrin icon, and returning All-stars headline the final weekend

SUMMARY: Coverage of the final day of the Women's EHF EURO 2022 in Ljubljana

BRONZE-MEDAL MATCH REVIEW: Montenegro took their first medal in any competition after a decade-long wait, as they defeated France 27:25

EHF EURO PODCAST: The podcast, in cooperation with the (Un)informed Handball Hour, delivers the inside stories of the Women’s EHF EURO 2022