FC Porto has won several titles in Portugal and has been increasingly competitive in the European scene. Last season, the men in blue and white reached the play-offs of the EHF Champions League, losing on away goals against eventual finalists Aalborg, and return with an appetite for something bigger.

Most important question: Can FC Porto make a step forward?

In the last editions of the EHF Champions League, FC Porto surprised and proved that is capable of winning in any European arena. But now everyone knows the blue and white team very well and it is going to be a hard road against Barça, PSG, Kielce, Veszprém, Motor, Flensburg and Dinamo Bucuresti. FC Porto has a very balanced squad, with players full of talent and a great coach.

“FC Porto's objective for the next season is to surpass the performance that the team has already achieved in previous editions. It is not just about living up to the culture of overcoming difficulties that has existed in our club for many years, but also because we are aware of our current value,” says club manager António Borges.

“We will face the best clubs and this forces you to always be at the limit of your ambition. FC Porto have a history of ambitions and achievements that everybody knows.”

The first match on 15 September is in Ukraine against HC Motor and team captain Daymaro Salina, who heads into his eleventh season in FC Porto’s jersey, says: “Our biggest motivations will always be to do more than what we have done in the past. We will be in the strongest group but we will face it.”

Salina is particularly looking forward to the match against Barça: “We never played against them and they are the champions.”

Under the spotlight: Rui Silva

Rui Silva, who heads into his seventh season in FC Porto's jersey, has been producing great performances for his club. And he created a fabulous moment recently, scoring the decisive goal in the last seconds that put the national team in the Tokyo Olympics.

The center back, who recently renewed his contract with the club until 2025, has a giant talent and an above-average intelligence playing handball. In addition to the goals he scores, he makes precious assists and plays very well with the line player.

Always positive and focused, with Quintana tattooed on his right arm, he is one to watch in the EHF Champions League. 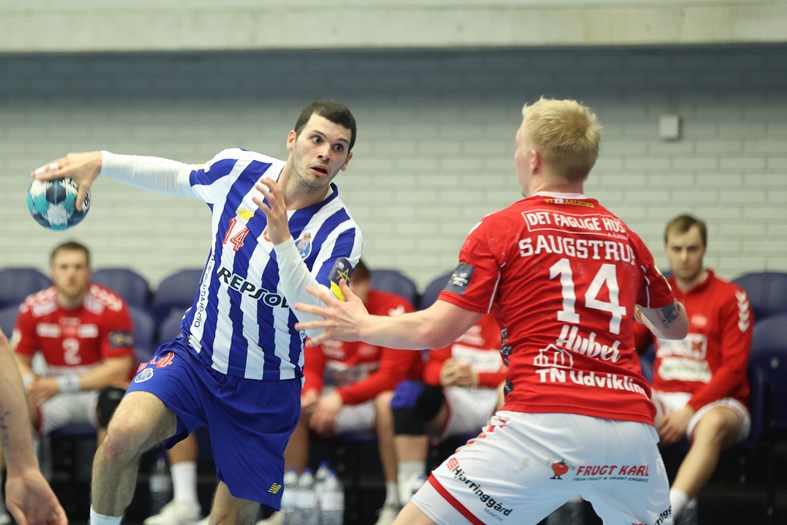 Since the arrival of head coach Magnus Andersson in 2018, good vibes, confidence and a new playing style, including the 7vs6 attack, have changed FC Porto.

With several great matches giving more experience to the players, the “Dragons” reached the third place in EHF Cup in 2019 and last season won all the 30 matches in the Portuguese league, as well as all the games of the national cup, winning the final against SL Benfica 31:27.

FC Porto have a new mascot. The Portuguese team had DRACO and now he has a partner named Viena.

Previous Article Favourites through to the medal rounds at Tokyo 2020

ROUND PREVIEW: The 2016 champions are among a handful of favourites who lost their season opener last week

GROUP B REVIEW: Thanks to their impressive defence in the first half, HC Motor took their first points of the season against FC Porto

Summary: Barça win but some favourites stumble in round 1

SUMMARY: Coverage of the eight matches in round 1 of the EHF Champions League Men 2021/22 group phase

Increased pressure no problem for Sandell

FEATURE: The EHF Champions League 2020/21 runners-up are back — but this time around, it will be difficult for Aalborg to surprise

This is Me: Carlos Ortega

GROUP A REVIEW: Alina Grijseels' 11 goals against Buducnost powered Dortmund to their first win this season

GROUP B REVIEW: CSKA overcame a sloppy start in their first match this season to beat 34:27 Kastamonu Belediyesi GSK

GROUP A REVIEW: A 5:0 unanswered run that prevented Team Esbjerg to score for nine minutes was the cornerstone of Brest Bretagne Handball’s…

GROUP B REVIEW: despite some problems in the first half, Györ cruised to a five-goal win in Ljubljana

GROUP B REVIEW: Nora Mørk's 12 goals powered Vipers to a comfortable win in a Nordic derby