Ready, steady, go! The race to the Women’s EHF EURO 2022 in Slovenia, North Macedonia and Montenegro has been officially opened on Thursday with the draw of the qualifiers.

The groups were drawn by EHF President Michael Wiederer and EHF Secretary General Martin Hausleitner in a ceremony moderated by Markus Floth.

An eye-catching result of the draw saw the 2018 champions and 2020 runners-up, France, paired with Croatia, who enjoyed a stunning run to the bronze medal last December.

France won their EHF EURO 2020 semi-final 30:19, so Croatia will be eager to take them on again and try to settle the scores.

Their group 4 is completed by Czech Republic and Ukraine.

Also, Olympic champions Russia, the silver medallists from 2018, will try to get their 2022 berth in duels with Poland, Switzerland, and Lithuania in group 1.

Elsewhere, world champions Netherlands, who won silver at EHF EURO 2016 and bronze in 2018, and their neighbours Germany will continue their competitive rivalry when they share group 3 with Belarus.

One team advancing from qualification phase 1 - either Greece, Italy, Bosnia and Herzegovina, or Latvia - will complete this group.

Denmark, who reached the semi-finals when hosting the event in 2020, will be up against Romania and Austria in group 2, which also includes a team from phase 1: either Faroe Islands, Israel, or Finland.

The 2019 world championship runners-up, Spain, have been handed Hungary and Slovakia as opponents in group 5, with one of the following teams from phase 1 to be added: Portugal, Kosovo, Luxembourg, or Cyprus.

Finally, 2014 bronze medallists Sweden will find Serbia, Iceland and Turkey as their obstacles to the 2022 finals tournament in group 6. 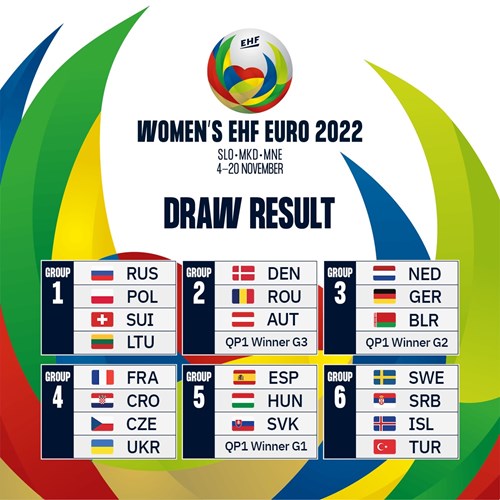 Qualifiers scheduled to start on 6/7 October

The three teams coming through phase 1 will be determined at three tournaments involving a total of 11 teams to be played during an additional national team week from 31 May-6 June.

DRAW PREVIEW: The six four-team groups in the Women’s EHF EURO 2022 Qualifiers will be drawn on Thursday

NEWS: Say hello to the look for the Women’s EHF EURO 2022 – and find out what it represents

First step towards 2022 revealed for 11 nations

NEWS: Draw for qualification phase 1 of the Women's EHF EURO 2022 made on Wednesday morning.

NEWS: The draw for qualification phase 1, featuring 11 teams, is scheduled for 17 March

Four tales from a remarkable week of qualifiers

All tied between Czech Republic and Russia

GROUP 3 REVIEW: Russia managed a comeback and even almost got an away win against the Czech Republic, but missed a last-second chance on an…

GROUP 3 REVIEW: After an important win against the Faroe Islands, 26:25, Ukraine are a step closer to EHF EURO 2020

GROUP 5 REVIEW: A tight game saw an amazing end with an in-flight goal courtesy of Luc Steins and Kay Smits giving the Netherlands the last-…