On the other hand, Veszprém’s long dream of claiming the Machineseeker EHF Champions League title has not yet come true, but the club started a new era with Momir Ilic as head coach last season.

Most important question: Was last year's EHF FINAL4 appearance after a one-year hiatus a step forward?

Telekom Veszprém HC are known for dreaming about becoming the second club from Hungary to become champions of Europe. Budapest Honved triumphed in the IHF Champions Cup in 1981/82, the predecessor of the current EHF Champions League, and Veszprém have narrowly missed out on winning the top prize in European handball on four occasions.

László Nagy has highlighted the importance of Europe's top-flight competition to the team. He said: "Our goals is to make it to the EHF FINAL4 again. We know that it is going to be a difficult season, but we are Veszprém and we’re counting on our amazing fans. The EHF Champions League is the best European competition. What more is there to say?"

As advancing to Cologne last season was a positive surprise for Veszprém, their supporters again share the hope that their side will lift the trophy this season.

Under the spotlight: Rasmus Lauge

After four seasons with Veszprém, the Olympic, world and European champion Danish left back will return to Bjerringbro-Silkeborg, his first professional club, in 2023.

"My goal is to win all possible trophies with the team before I return to Denmark. This is the biggest motivation for me," said Lauge.

In Lauge, the management saw a player they thought was the missing piece for Veszprém to win the EHF Champions League. In the 2022/23 season, he will have his last attempt with the Hungarian side.

However, Lauge understands that the season will not consist of just one game. "We have a lot of exciting matches waiting for us next season, but for me it is always special to play against Danish teams, so I’m looking forward to the one against GOG," said the team captain. 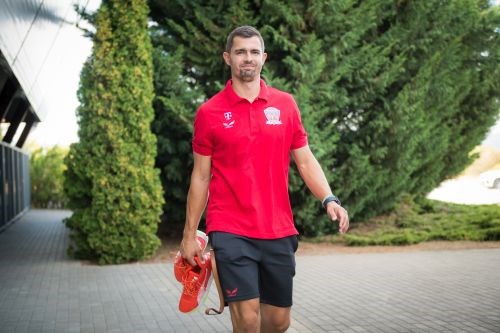 The long-awaited fresh energy arrived last season and was integrated successfully into the team. Although it only delivered one domestic trophy, the Hungarian Cup, the club have huge faith in Momir Ilic, who took over as head coach last season.

The path seems to be set up, yet Veszprém have to break a habit of losing in the biggest matches if they are to open the gate of EHF Champions League success.

Telekom Veszprém are celebrating the 45th birthday of the club. To celebrate this milestone, the club organised the "2nd Veszprém Handball City Festival" from 26-28 August, with THW Kiel, Lomza Industria Kielce and SG Flensburg-Handewitt participating.

Elderaa eyes big break in second half of the season

FEATURE: Yehia Elderaa returns to Veszprém after the World Championship, hoping for a place in the TruckScout24 EHF FINAL4 2023

SUMMARY: CSM on top of group A, Metz secures the top spot in…

LIVE BLOG: Quarter-final and play-off places on the line in Round 13 of the EHF Champions League Women

Odense secure third place with big win over Most

GROUP A REVIEW: Odense Håndbold clinched third place in the final standings of the group with their eighth win of the season, 37:19, over DH…

GROUP A REVIEW: A last-gasp game-tying goal from Cristina Neagu saw CSM Bucuresti secure a point against Brest for a hard-fought 30:30 draw

Györ takes over 2nd place ahead of crucial last round clash

GROUP B REVIEW: Hungarian powerhouse eliminates Kastamonu from the competition

GROUP B REVIEW: Esbjerg secured their third straight win and earned a boost ahead of the crucial last round of the group phase

GROUP B REVIEW: Bruna de Paula and Kristina Jörgensen helped seal first place in the group for Metz with a narrow win at home

Vipers utilise back line to clinch big win against Krim

GROUP A REVIEW: Vipers Kristiansand piled on the pressure on CSM Bucuresti after recording a comprehensive home victory against Krim

MOTW REVIEW: FTC-Rail Cargo Hungaria secured their place in the play-offs with an excellent fight back against SG BBM Bietigheim, taking a 2…

GROUP B REVIEW: Anniken Obaidli and Eli Marie Raasok led the Norwegian side to a historic spot in the play-offs