In between taking care of her family’s farm, including dozens of fields, 250 bulls and 40,000 chickens, Clara Woltering is still part of the handball business.

For one year, the former German international and now agricultural engineer has been goalkeeper coach of Borussia Dortmund.

Woltering became part of the staff that steered Dortmund to their maiden voyage in the DELO EHF Champions League in the first season after finishing her outstanding playing career.

As a player, Woltering’s balance in this pinnacle competition is more than brilliant: In four years of Champions League, she raised the trophy twice – in 2012 and 2015 with Buducnost.

In her last international match for the Montenegrin side, in 2015, she won not one trophy but two: the Champions League title and the MVP of the EHF FINAL4. 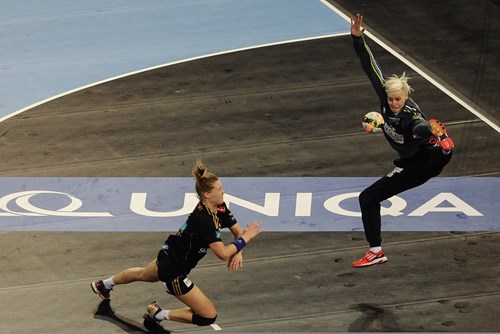 Then, Woltering went back to Germany, back home to the farm, as she had promised her parents when she left for her special international adventure.

“From the sporting point of view, I had the time of my life in Montenegro,” she says. “We won the Champions League twice, we had incredible training camps at the sea or in the mountains, and I made friends for a lifetime, which is even more important.”

Some of her friends will be her opponents on Sunday, when Borussia host Buducnost in round 5 of the Champions League group phase.

On Thursday, Woltering had a long phone call with Bojana Popovic, six-time Champions League winner and now sport director of the club.

“It will be a great pleasure to see some of my former teammates, as I only played together with less than half of the current team. Of course, we want to imprint the match and hope for a victory,” says Woltering.

Both teams had a shaky start to the season. Buducnost only have one point in their account after four matches, while Dortmund have two.

“For Buducnost the preparation was really tough due to COVID-19, not only because of infections, but as they could play almost no test matches,” says Woltering. “Having a team in transition like them, you need to practice as much as you can. But their last match at Brest was really strong.”

On the other hand, Dortmund’s only really weak performance was against Brest. “The rest was quite OK for a debutant with players who have almost no Champions League experience. We won at Podravka and showed that we deserve to be part of this competition.” 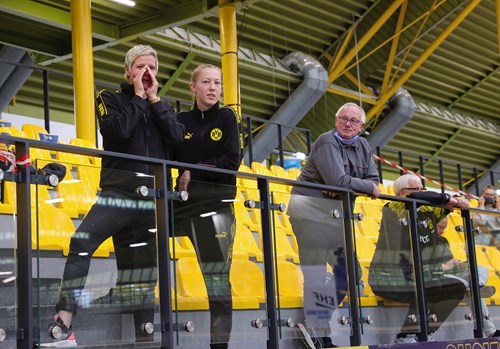 Last Sunday, Dortmund were ahead of CSKA for 59 minutes, but ultimately lost by one goal.

“Those are the defeats you really hate, but from which you learn most. But of course, I hope that the number of those bitter defeats stays low,” says 37-year-old Woltering. “The world does not stop turning because of this defeat, but we could have beaten a top team.”

The home match against Buducnost on Sunday – most likely without spectators in the stands – is one thing for the former goalkeeper and bronze medallist at the 2007 World Championship; the away game is another.

“Montenegro and Podgorica are something like my second home. And due to my job and becoming goalkeeper coach for Dortmund and the German Handball Federation, there is too little time to travel there. So I am really looking forward to combining this trip with handball and seeing so many of my good friends, though our time at Podgorica is quite short.”

The only thing Woltering does not miss from her Buducnost days is the “horrible traffic in Montenegro. They drive like hell, but in contrast to Germany, they have no traffic jams.”

But first, it is Woltering’s job to prepare Dortmund’s goalkeepers Isabell Roch and Rinka Duijndam for Buducnost’s attack: “I hope we have a better end this time.”

Besides her task at Dortmund, Woltering is part of the team of goalkeeper coaches for the German Handball Federation.

Last week, she was with the U20 women’s team, then she was lecturer for a seminar together with Mattias Andersson, who, aged 42, just had had his comeback in the Champions League with THW Kiel due to the injury of Niklas Landin.

“We have a great [coaching] team with a lot experience, including Olympic gold medallists such as Wieland Schmidt and world champions such as Henning Fritz.”

Previous Article Four teams join the race for round 3

Next Article THC and Molde hope to finish the job

GROUP B REVIEW: In a thrilling game in Dortmund, Buducnost finally celebrated their first victory in the current season

ROUND PREVIEW: Rostov host Metz in what could prove to be a pivotal clash for group A’s standings, while top scorers Ana Gros and Elena Mikh…

Kielce and Aalborg aim to stay on top

ROUND PREVIEW: Tough away tests for PSG and Kiel in round 5, while Zagreb and Celje duel for first points

NEWS: Latest developments in the playing calendar of the EHF Champions League

FEATURE: Aalborg’s star line player discusses their perfect start and the biggest challenge to date in the upcoming Match of the Week

NEWS: The Match of the Week in round 5 travels to Denmark for a top clash in group B

Odense back on track after win at Podravka

GROUP B REVIEW: A solid defensive performance in the second half helped Odense to claim their biggest ever win in the DELO EHF Champions Lea…