Just 16 days after Barça ascended the EHF Champions League Men throne for the ninth time, the line-up for the new season is complete as the EHF Executive Committee reached its decision on the teams taking part in the 2021/22 season.

The playing system with only 16 teams adopted before the previous season will also apply for the upcoming 29th edition. The teams will start the group phase in two groups of eight teams, while Wednesdays and Thursdays will remain to be the days reserved for the EHF Champions League Men. 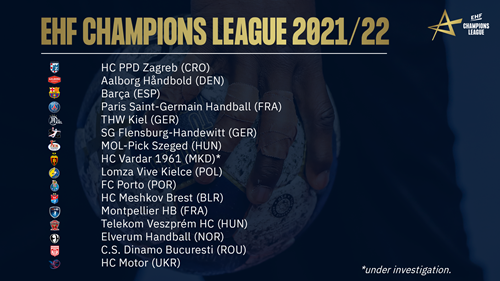 In total, there will be six former winners of the EHF Champions League (Barça 9x, Kiel 4x, Vardar and Montpellier 2x each, Flensburg and Kielce), when the group phase of the new season commences on 15-16 September.

Participation under investigation for Vardar

Already before the previous season HC Vardar 1961 from Skopje were admitted to participate in the European top-flight under certain obligations, which were not resolved. During the registration period for the upcoming season, the EHF received additional information which will lead to treatment by an official procedure within the EHF. To secure the position of the EHF and EHFM, the EXEC requests a deposit of 1,000,000 € from the club as a security in two instalments (the first by 13 July and the second by 27 July).

This deposit will be used to cover payments that are requested from the club as a result of the possible legal decision. This is a precondition to uphold the participation of the club in the 2021/22 Champions League, otherwise, the substitute club (RK Gorenje Velenje) will automatically replace Vardar 1961. This would furthermore mean that no participation is possible for Vardar in the EHF European League. For the time being, Vardar stay on the list of the clubs for the EHF Champions League with a status of participation under investigation.

Based on the proposal of the evaluation group the EXEC dealt with 12 requests for upgrades from the second tier EHF European League. Adhering to a criteria system that looked at different fields including venue, TV, spectators, results in past EHF competitions, product management and digital, the EXEC members confirmed six requests for upgrades (HC Meshkov Brest, Montpellier HB, Telekom Veszprém HC, Elverum Handball, CS Dinamo Bucuresti and HC Motor).

The remaining six requests were not granted, however, the EXEC assigned Velenje as a substitute team.

The group phase draw will take place on Friday 2 July at 11:00 CEST in Vienna and will be streamed on EHFTV, the Home of Handball YouTube channel as well as the Home of Handball Facebook page. A draw preview and the seeding list with pots will be published in due time.

Increased pressure no problem for Sandell

FEATURE: The EHF Champions League 2020/21 runners-up are back — but this time around, it will be difficult for Aalborg to surprise

This is Me: Carlos Ortega

ROUND PREVIEW: The 2016 champions are among a handful of favourites who lost their season opener last week

GROUP A REVIEW: Alina Grijseels' 11 goals against Buducnost powered Dortmund to their first win this season

GROUP B REVIEW: CSKA overcame a sloppy start in their first match this season to beat 34:27 Kastamonu Belediyesi GSK

GROUP A REVIEW: A 5:0 unanswered run that prevented Team Esbjerg to score for nine minutes was the cornerstone of Brest Bretagne Handball’s…

GROUP B REVIEW: despite some problems in the first half, Györ cruised to a five-goal win in Ljubljana

GROUP B REVIEW: Nora Mørk's 12 goals powered Vipers to a comfortable win in a Nordic derby

MATCH OF THE WEEK REVIEW: Metz opened their campaign in style, claiming a six-goal victory at Odense